Michael Benning is a very intriguing prospect because he is such an offensively minded defender and has an excellent family pedigree, with brother Matt, father Brian, and uncle Jim all NHL veterans. He is a very good playmaker from the blue line in and he pushes the pace of play with how quickly he processes the game and moves the puck appropriately.

He can be overmatched by more physical opponents but is certainly willing to engage, despite his small stature. Judging the AJHL is challenging as his team, with fellow 2020 NHL Draft prospect Carter Savoie, has been carving up the league (24 W and 2 L) but he has shown he can elevate the play when Savoie is not on the ice as well. 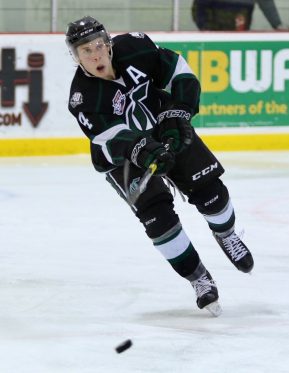 Skating: Benning has a nice quick stride that helps him get to top speed quickly. His top speed isn’t high end but he won’t be hindered by his speed. His skating looks a lot better in terms of edge work where he uses his edges very effectively especially moving around in the offensive zone. He can shift quickly without losing speed and get back into stride very smoothly. He edges are on display as he can spin off defenders and has a nice array of shifts in body position that enable him to keep his movements very efficient. Grade: 55

Shot: His shooting is a positive for a couple of reasons, first he is a volume shooter. He is constantly funnelling pucks towards the net from anywhere. Secondly, he gets his shot past the first defender pretty consistently, especially when using a quick release wrist shot or half slap. He can get a bit erratic with one-timers and slap shots where he needs to take something off it to improve his accuracy. When he is down below the dots he has a good back hand release and wrist shot. Grade: 50

Skills: His pucks skills are pretty impressive as he can carry the puck through all three zones. Once in the offensive end he is focused on generating offense which is where his skills shine. He has good vision and passing ability that enable him to make higher end plays than most. He is comfortable holding the puck under pressure to make a play because he can stickhandle, pivot and move so effectively that he does not succumb to the pressure. He makes cross ice one-timer passes consistently into the sweet spot for shooters. He pushes the pace of play forward and does not take his foot off the gas. He pinches effectively and if a lane is open to drive the net he does so with purpose. He is confident enough to go below the dots carrying the puck which opens up a lot of ice for teammates as the defense collapses on him. Grade: 60

Smarts: Benning moves the puck quickly because he seems to know what he wants to do before he gets the puck. He really pushes to get into the play once he has completed the break out of his own zone. He is smart in how he finds space by moving in off the line making the defense constantly adjust to his varying locations. Through movement he creates lanes for passing. He judges his pinches well and follows the rotation of the puck, moving into a good position as the play develops. Playing with his head up he will take whatever the opposition gives him and he doesn’t just dump the puck in at the redline unless he has no other option. If he has space he will attack. Defensively, he processes the game at a high speed, and gets to pucks ahead of his opponents in 50/50 battles. His active stick helps him break up plays or move loose pucks quickly. He is a work in progress in his own zone as he can make a few really nice aggressive plays to create turnovers, but on other occasions starts to leave his own zone early, leaving his team short down low. He is very good defending the pass on 2 on 1’s. Grade: 60

Physicality: Benning is not scared of the physical side of the game however he can be overmatched when he gets into the battle a bit. Defensively he can defend a skill player well but a bull rush drive to the net can leaving him hanging off the back of the forward leaning in or taking a penalty. The positive is that he will engage physically and doesn’t shy away from contact.  Grade: 45