Martin Necas and Betting On Talent

October has been a kind month to the Hurricanes ever since Rod Brind’Amour took over as head coach and 2022 was no different. The team finds themselves in the thick of what is a highly competitive Metropolitan Division and have a slight leg up on the rest of the pack with 13 points in only nine games played. Leading the way is the familiar, but somewhat new duo of Andrei Svechnikov and Martin Necas. The Hurricanes have come to expect great things from Svechnikov and he has delivered so far, answering any questions about his finishing prowess with eight goals in the month of October. Necas, on the other hand, is a more interesting case.

The final first round pick of Ron Francis tenure, Necas always figured to be part of the Hurricanes core but struggled to break into that star tier, despite showing flashes of brilliance. He always did just enough to give fans hope that he could give the team a three-headed monster at the top of their lineup with Aho and Svechnikov. Unfortunately, he hit a wall in the 2021-22 season. Still finishing with a respectable 40 points in 78 games, Necas’ talent was on full display but translating it into becoming a game-breaking player only happened in small doses. It left many fans wondering if he’s going to be part of the team’s future or if he’s just another highly skilled forward who is just a complementary guy than a key fixture. The team felt the same way, opting to bridge him for two-years at $3 mil. instead of locking him up long-term.

Through nine games, Necas is showing that he can be a difference maker. He is off to the best start of his career, being held off the scoresheet in only one game so far and carrying most of the Hurricane’s offense. The duo of him and Svechnikov are responsible for nine of their 20 goals and have been dominant in terms of tilting the ice. Carolina had a strong second line in past seasons, whether it’s the strong possession game of Jordan Staal or the solid all-around game of Vincent Trocheck. It has been years since they had a “second” line produce like Necas and Svechnikov have in these first nine games.

Of course, this should be expected to level out a bit. Svechnikov is a good goal-scorer, but not the one who will consistently finish 24% of his shots and Necas has seen his shooting percentage fluctuate dramatically over his career. Although there is some hope that they can continue to produce at a high level for the rest of the season, as this line along with Jesperi Kotkaniemi are controlling 64% of the Expected Goals at five-on-five per Natural Stat Trick. This isn’t a new development for a player like Svechnikov, but Necas has always struggled to translate his skill to both territorial dominance and producing chances. It’s a major reason why the Hurricanes opted to bridge him instead of signing him to a long-term deal like they do with most of their young players. It was a fair concern after last season because as much as the Hurricanes needed a player like Necas, you don’t want to commit 5+ years to a middling forward who you aren’t sure about.

With Necas, it was more of a conundrum than you’d think. He didn’t produce as much as he could have but there are things he can do that most players can’t, and he brings an element that a forecheck-heavy team like the Hurricanes need. Some of the microstats from All Three Zones illustrate why this was a frustrating issue for them last year. 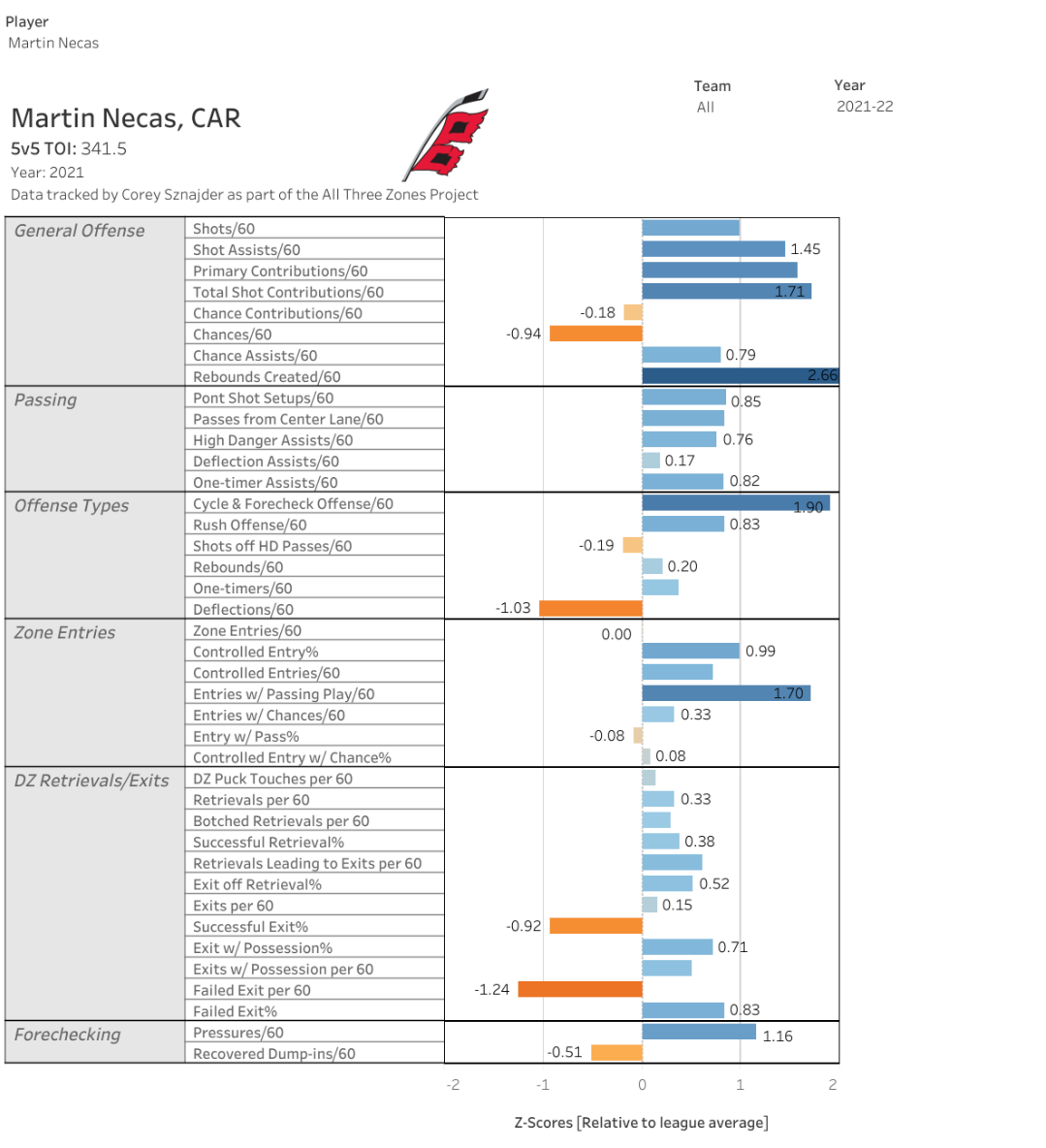 There are a lot of data points in this chart, but the ones you should focus on are the Shots vs. Chance Contributions, Rush Offense and Zone Entries categories. Necas’ struggled to translate his skill to results because while the play went through him on his line, he played most of the game on the perimeter. His playmaking skill didn’t go to waste, but he was usually left alone on the outside and was stuck trying to funnel pucks to the net, settling for point shots. He created off the rush, but not as much as he potentially could because the Hurricanes play such a forecheck-heavy game where the neutral zone isn’t as much of a factor. Necas is one of the few players on the team who had the green light to carry the puck in, but those opportunities were few and far between when you look at his workload in the neutral zone (about league average).

So, at the end of the day you have a highly skilled winger stuck playing on the perimeter with a couple of opportunities a game to break things open off the rush. This was on full display in Carolina’s playoff series against the Rangers, particularly in Games 3 and 4 where Necas contributed to 16 of the Hurricanes five-on-five shots and was held to no points. Basically, this means the offense ran through him and it didn’t lead to much in terms of results.

We could go through each clip individually, but there’s a few in particular that really stand out. The first is the rush opportunity about nine seconds in. Necas recovers the puck in the defensive zone, has space to skate or move the puck to Svechnikov. Instead, he pivots and moves the puck to Trocheck for him to enter the zone and Necas ends up setting up a low percentage point shot. You’ll see quite a few of those in his highlight package. There’s not a lot of direct plays from him because the puck has to go through one or two layers for anything tangible to happen. It’s one of those instances where you wonder if it’s bad habits or the coaches telling him to make the simple plays and go for shot volume. Either way, both the structure and execution were off for Necas and it left many wondering if the Hurricanes were ever going to unlock what could be a special player.

You can see the effort, though. Especially on those jam plays where he’s going to the net but can’t quite find the handle on the puck. They’re tough plays to finish and it’s not an adjustment every player can make. Aho made this adjustment and it’s why he’s led the team in goals for so many years in a row. He knows how to get lost in coverage in front of the net and maneuver himself to create plays out of nothing. With Necas, he’s better when he has room to go against the grain for a shot or taking an extra second to look off a defender. He can play the half-rink game and feed the point, but it’s not something that utilizes his skillset the best and why it was fair to wonder if he was going to be the best version of himself in Carolina.

Through nine games, things look drastically different and it’s more than just on the scoresheet. Necas is a dangerous player whenever he is on the ice now. Is it just a hot stretch or something the team can expect from here on out? Most likely case is somewhere in the middle, but there are some positive signs in the All Three Zones data if you’re a Hurricanes fan. Through six of the nine games tracked, Necas is third on the team in zone entries and second behind Sebastian Aho in controlled zone entries. By comparison, he was sixth on the team in zone entries last season. He is also averaging 7.49 scoring chances per 60 minutes at five-on-five compared to 2.40 last season and is only behind Andrei Svechnikov in scoring chance contributions per 60 minutes. This means he is more involved in the team’s transition offense, is getting more opportunities to create off the rush per game and is doing a better job of getting to the dangerous areas than he was last year.

Part of this is better execution but the Hurricanes have also done a better job of building their game around Necas instead of the other way around. Him, Svechnikov and Kotkaniemi are all guys who like to carry the puck, but Necas is probably the best passer of the three, therefore he gets to do most of the work in the neutral zone while the other two make themselves options for give-and-go plays. It doesn’t always have to be that way, though. Necas himself has gotten better at being that support guy when he needs to be so he can lead his linemates into the zone with speed and give the Canes more of a counter-attack threat than they had last year.

Good work by Svech below the goal line & to get up in the play with Kotkaniemi. Necas has been great as that support forward on exits these first two games. pic.twitter.com/Skdoy1tdWP

There is also the elephant in the room of how everything he touches seems to end up in the back of the net, which is obviously not going to happen every night. However, if you look at the process and chemistry that him and Svechnikov are developing, it’s hard to not see their potential as one of the most dangerous lines in the league.

It’s interesting looking at these clips individually because you can see the areas where Necas has made his improvements and parts where his linemates had to adjust to him. The first two clips, you see a more direct approach from him, attacking the net more instead of deferring to his linemates. He’s not circling the net and trying a wrap-around if he feels pressure and trusting himself to beat a goaltender one-on-one more.

In the clip from the Oilers game, you’ll see him make a move around a defender instead of pulling up and looking for a point shot, which leads to the Hurricanes getting a cross-seam pass with numbers. He also read the play well to get himself a one-timer attempt in the slot with Kotkaniemi diverting some attention to the front of the net.

You’ll also see that the perimeter aspect to his game is still there in the Seattle and Washington clips. The difference between this and last year is that his decision making is quicker even if it’s a deliberate looking play. Once he draws the defenders to him, he quickly moves the puck to the net while the Hurricanes still have an outnumbered situation. His linemates also deserve credit here for adjusting to his tendencies because it’s not something that’s easy to do at the NHL level. It’s also where having strong off-puck players like Stastny and Kotkaniemi will help him over the course of the year.

With the skill level of teams in the Metro on the rise, the Hurricanes needed a player like Necas to reach that next level if they want to keep up in their division. One month in, they’re getting their wish and they have some reinforcements on the way with Max Pacioretty due to return later in the year. Good teams always have young players ready to take the ball when the old guard declines or leaves via free agency and Necas’ emergence along with Seth Jarvis couldn’t have been timed any better for Carolina. Now it just depends on if he can stay consistent throughout the year.