Samuel Hlavaj is one of the more polarizing goaltending prospects eligible for this upcoming entry draft. On the one hand, he had an excellent year with the Phoenix this season, and a 33-5 record is impressive regardless of any circumstances. Hlavaj was personally 20-1 since December 1st and did not give up more than four goals in any of his starts over that span. In fact, four goals against was his high-water mark for the season, save for one seven-goal effort against Chicoutimi. When his team has needed him, he has passed the test. His international experience as an already-two-time starter for the Slovakian World Junior team is also a big feather in his cap. While his game is raw, his quickness and his anticipation will be massive assets for his prospective career.

On the other hand, detractors will point to the fact that Hlavaj played in front of the second-best defensive team in the QMJHL this past year, a team that surrendered the third-least shots against per-game, and that Hlavaj, while boasting very good numbers, was only third in save percentage. The question about the netminder is whether he is as good as he looks, or the product of an excellent team. The fact that Hlavaj has an inefficient technique and issues with consistency despite a 33-5 record says a lot.

This was the Slovakian’s second season in North America, as last year, in front of a woeful Lincoln Stars team of the USHL, he did not look nearly as polished or as strong as he did this year. His growth year-over-year is remarkable, but he is still raw, wastes movement and shows holes in his stance that he has to close.

That debate will persist next year as well, as the Phoenix are likely to be a contender again with Hlavaj in goal. What is clear is that this season, whether he is responsible for it or not, he did not mess it up, and that counts for something. Despite his flaws, Hlavaj already has pro size, and is an exciting and entertaining goaltender who will benefit from more seasoning, and his raw talents will continue to mould into a promising goaltending prospect. 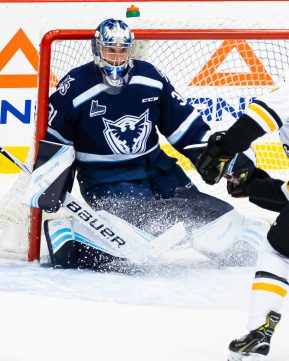 Athleticism/Quickness/Speed: Hlavaj has the quickness and anticipation to set himself in position on any shot he sees, but it takes him some movement to get there. He makes it in time, but it is not the most efficient style. His big frame and strong body allow him to handle any issue in front of the net, and his speed post-to-post keep him in the proper position through any offensive chance. His speed cross-crease is among the best in the QMJHL. Grade: 60

Compete/Temperament: Hlavaj fights for the puck, fights for his position in front of the net well, and gets right in the thick of things in front of his cage. He does not sit back and wait for the play to come to him. It can cause him to make desperation saves and rely on his quickness, but he is a battler. He followed up every loss this season with a win, so he does not get discouraged or slide too far into a slump, although his team helped him out with their league-leading record this season. His worst effort of the season, a seven-goal loss to Chicoutimi, was followed up by nine straight wins to finish the incomplete season. Grade: 55

Vision/Reading Play: Hlavaj has no trouble tracking the puck nor does he have any issues with anticipating the play. He may not arrive there in the most beautiful way, but he will get there when he needs to and make the save attempt. He is not a goalie who waits for his defenders to clear the path, he will do what he can to see the puck and gets low in his stance to keep an eye on it. His reads keep him in the play when he has scrambled and needs to make a sliding save. Grade: 60

Technique/Style: Hlavaj is a battling, scramble goaltender who plays smaller than his 6-4” frame. He plays low to the ice and can surrender the shoulders to cover the seal of the ice. He is not afraid to make a save with any part of his body. He insists on staying in front of the shooter at all times, which can mean small pushes instead of keeping ahead and minimizing movement, but that can be coached out of his game. His compete level and his quickness cannot be taught, but it needs to be harnessed a bit more. Despite his solid statistics though, pucks got through him more than one would like at times this season, in particular between the arms and the body. Grade: 50

Rebound Control: Hlavaj played so well in tandem with his defenders that rebounds were not a big issue this season. He is a goalie who plays well on second and third chances with his quickness and his anticipation. Having said that, his technique could be further nurtured to minimize the rebounds. He had games where his rebound control was top notch, with other games where rebounds needed to be cleared. Inconsistency in this regard is more the issue than the technique itself. Grade: 55

Puck Handling: Hlavaj’s puck handling is as entertaining as the rest of his game. He is not afraid to venture out and play the puck to a teammate, in the corners or in the defensive zone if need be. He hits passes well to teammates but does end up in close calls where a giveaway would end up in the back of his net on occasion. He plays risky, but his passing can make up for it. Grade: 50 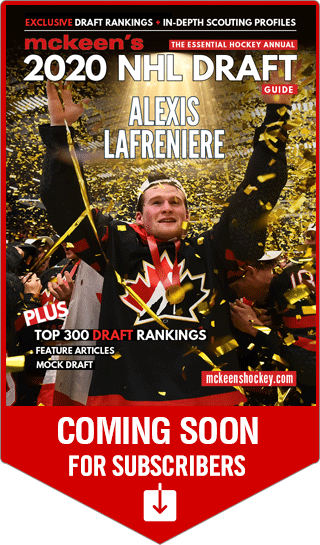