With Team Russia defeating Germany 7-0 on Saturday night in Ufa, I wanted to post some of my thoughts on the goaltending so far in the 2013 World Junior Championships. Thanks to NHL Network, I’ve been able to break down video of Andrey Makarov, Andrei Vasilevski, John Gibson, Marvin Cupper, Malcolm Subban, and Adam Nagy.

If you missed my segment earlier today on The Pipeline Show, you can listen to it right here. Two weeks ago, I had labeled the tandem of Vasilevski and Makarov as the best duo in the tourney, and so far that prediction has held true. Through three games, they have a .97 GAA and .974 SV%. That’s scary good for the competition they’ve faced. 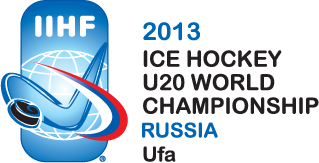 Team Russia barely survived a major scare in their 3-2 overtime win against Slovakia, but Vasilevski was very good under the pressure. He stopped all 11 shots he faced in the first period and 12-of-13 in the third. The goal he allowed with only 46 seconds left in regulation just snuck under his blocker, but he stayed poised against the pesky and motivated Slovakian team. He made three timely stops in OT and skated away with 32 saves.

Vasilevski had a much easier night against Team Germany in the 7-0 win, but he was still called upon to make 10-12 excellent saves. The best stop he made so far in the tournament came in the first minute of the third period. A tricky centering pass from below his left goal line landed right on the stick of a German forward, but Andrei came across by pushing hard off his left post and made a full extension with the right leg to get a skate on the one-timer.

Not only was it a great display of his excellent flexibility as the right pad sealed the ice, but he exploded off the left post and attacked the puck. He was also able to cover it without allowing a rebound, an impressive feat considering his size. The ability to make dynamic reflex saves with such a big frame is probably his biggest asset, and a big reason why he was selected in the first round last summer.

Vasilevski has stopped 73-of-75 shots in his two games for Team Russia. An impressive stat, but not surprising.

Makarov, a goalie who plays with tremendous pride when donning the Russian jersey, was outstanding in the 2-1 win over Team USA. He was poised and relaxed in a tight game that was laden with scoring chances from the get-go. He did an excellent job of killing penalties, absorbing low shots, controlling rebounds, and tracking the puck.

One of his biggest saves was a desperation left-pad stop very early in the first period, a stop that set the tone for his 41-save performance. He was voted the Player of the Game for his effort, and continued to boost his long-term value as a hidden gem for the Buffalo Sabres. They got an absolute steal with this guy, without ever wasting a draft pick.

When I evaluate Team Russia’s goalies, I discover more and more interesting parallels in terms of comparable styles with two veteran NHL goalies in Evgeni Nabokov and Nikolai Khabibulin. As I explain it below, this might help you better understand their styles, especially if you have only had limited viewings of both goalies.

Makarov is comparable to Nabokov in regards to their upright stances and narrow butterfly, economical movements, and their ability to scramble extremely well. Makarov is very skilled at sealing the ice on low plays, and I appreciate the way he fights to find pucks through traffic and screens. His narrow butterfly allows him to deflect away bad-angle shots from either wing with his stick, which I feel is more effective than employing the much-maligned and rigid VHS (vertical-horizontal stance).

Makarov is labeled a battler because he has very quick feet and recovers to his skates after making initial saves. So instead of doing a lot of sliding on his knees, he’ll recover and try to gain depth with short shuffles in order to take away rebound chances. Maybe the one thing I’d like to see Makarov adjust is his hands. The gloves are held low on his body, and since he’s a smaller goalie, shooters have a little more space to find the sweet spot over his shoulders.

That’s something I’ll keep an eye on as the tournament continues, but his low gloves haven’t cost him yet in this tournament, as he made at least three solid snags against Team USA.

Vasilevski is comparable to Khabibulin in regards to their wider stances and butterfly, and their combination of athleticism and flexibility. They’re more aggressive goalies than their counterparts, and they both set their hands higher on their bodies. Vasilevski is clearly gifted in terms of his ability to stretch out his legs so quickly, but while still staying square to shooters. He is truly a gifted athlete, one that I have no problem saying has “future NHL starter” written all over him. He is cool under pressure and does a good job of controlling his lateral movements.

One area to watch with Vasilevski is his puck-moving. During the Subway Super Series, I was bothered by the fact he would “push” or swat the puck to his teammates with only one hand on the stick. But in the 7-0 win over Germany, I saw at least three instances where he actually passed the puck with both hands on the stick. He’s not the type of goalie that is active coming out of the net, so maybe Team USA will dump pucks in deep and force him to turn it over.

Moving on to Team USA, I have really liked the play of John Gibson so far. He has stopped 47-of-49 shots after a strong effort in the 2-1 loss to Russia and the 40-minute shutout over Germany. This is even more impressive considering he’s coming off a hip injury a few weeks back, and had a poor showing in the 5-1 loss to Finland in the prelims.

What I’ve appreciated the most so far about Gibson’s style is his body positioning. He makes the most of his wide frame thanks to strong lateral mobility and he is very even-keeled in the crease. One trait that really stands out right now is his ability to push into and behind pucks, especially on shots that are re-directed or tipped coming across his body. He makes a lot of saves with his chest and shoulders square to the puck, a sign he is very strong in the core area. He also seals off his posts very well. He may not be the most fluid skater, but he’s big, quick, and aggressive.

I don’t think anyone can fault Gibson for the two goals he allowed in the loss to Russia. If not for some big saves (including a 2-on-0 chance with 17:09 left in the second period of a 1-0 game), USA doesn’t even stand a chance.

The first one was a seeing-eye shot that bounced off bodies as he tried to reach out with the blocker, and the game-winner was a nice individual rush around Seth Jones that led to a goal-mouth scramble. But Gibson did his job by sealing the short side post and making the first save with the paddle of his stick. He even made a nice stretch with the right pad on the rebound, but it appeared that he suffered from a slip-out with his left skate, and he just barely missed getting a right toe on the goal.

I’m going to save most of my thoughts on Malcolm Subban for a later blog post. I want to see how he does against better talent. That’s not to say Germany and Slovakia didn’t challenge him, but there is so much pressure on his shoulders that I want to evaluate him a little more first. He’s being over-analyzed to the extreme by the media and fans, and while that comes with the territory, three of the six goals he has allowed came while shorthanded.

I do think he appeared a little shaky and uneasy at times, and I did not like his body language in the first half of the win over Slovakia at all. Subban has shaken off the pressure of giving up three goals in the first two periods of each game with very solid third periods, but negative body language has no place in a tournament like the World Juniors.

Regardless, if Subban can continue to make timely saves in the third period, it will give Canada a chance against Team USA and Russia. Everyone knows those are the true tests, so the pressure only mounts from here.

I’ll close by giving credit to Slovakia’s Adam Nagy. His performances against Canada and Russia were solid despite what the stats show. He’s a smaller-framed goalie that plays big by utilizing a wide stance in order to take up as much space as possible. He holds his hands in very good position, he has an active stick and good reflexes, and motivates his teammates by working extremely hard.

My two hidden gems have done well so far. Luca Boltshauser stopped 21-of-23 shots in a 7-2 win over Latvia, and Red Deer Rebels goalie Patrik Bartosak made 29 saves to lead the Czech Republic to a 3-1 win over Finland. Aside from Makarov’s win over Team USA, Bartosak’s performance is the only true “steal” of the tournament.

Keep an eye on Sweden’s Niklas Lundstrom as well. He came off the bench completely cold in the shootout in a 2-2 tie against Switzerland and stopped all three shots he faced to give Sweden the 3-2 win. He followed that up with 20 saves in a 5-1 win over Latvia. Considering Oscar Dansk has yet to play in this tournament, the coaching staff clearly has a lot of confidence in Lundstrom and (draft-eligible) Joel Lassinantti.

That’s enough to chew on for now! Expect another blog after the relegation round ends, so we can get pumped up for the medal round next week. I’m also dropping live scouting notes on Twitter @TheGoalieGuild, so be sure to follow along on there as well.