A few weeks ago, I was invited to attend the first-annual ProHybrid Training USHL Prospects Tour. My mission? To publish independent scouting reports on every goalie attending the camp.

It was not only a great chance for me to scout young talent within one of the most popular goalie training programs in Minnesota, but it was also a great way to test my preparation and organization skills; I had to compile a massive amount of scouting notes in three short days, then mold it all into neat and tidy reports.

ProHybrid Training's USHL Prospects Tour was a very unique "invite only" goalie camp (1993-98 birth years) because it not only included high-level on and off-ice training, but it provided the goalies with a chance to gain valuable exposure in front of two USHL coaching staffs and an NAHL goalie coach.

The bus tour included stops in three different cities. It started in Richfield, MN, and then went due south to Des Moines, IA, and then pushed northeast to Green Bay, WI, and then back to the Twin Cities.

The first training session took place on Friday afternoon, May 24 in Richfield. This is the home of the expansion North American Hockey League (NAHL) team, the Minnesota Magicians. The goalie coach for the Magicians is A.J. Bucchino, who also happens to be one of the head goalie instructors at ProHybrid Training, so every goalie had a chance to pick his brain all weekend long.

Once the training session in Richfield was complete, we departed on a private bus for Des Moines, home of the USHL's Buccaneers. We spent Saturday (May 25) training in their home arena, where every goalie had a chance to perform drills in front of Buccaneers head coach and general manager Jon Rogger. He also held a "Q&A" session with the goalies in between the two on-ice sessions, providing great insight on the innerworkings of a USHL team, and what he wants to see out of a goalie trying out for his team.

On Saturday night, the bus shipped everyone over to Green Bay, WI. That was the final stop on the tour, as Sunday (May 26) was spent training at the Green Bay Gamblers' practice facility.

It was there that we were joined by Derek Lalonde, the head coach and GM of the Gamblers, and someone who has a reputable goalie coaching background. Lalonde was the assistant coach with the University of Denver Pioneers before taking on his new role with the Gamblers, and has worked with some high-level pro goalies like Marc Cheverie, Peter Mannino, and Adam Berkhoel.

When the training sessions were complete in Green Bay, the bus shipped everyone back to the Twin Cities, and the exhausting weekend was over in a flash. I took a few days to recharge the batteries, then promptly started plugging away at the 20-plus reports.

The ProHybrid USHL Prospects Tour included more than 20 goalie prospects. Most of them were Minnesota natives, but also included goalies from Washington, California, Alaska, North Dakota, Wisconsin, Florida, and New York. Click on the names below to view their scouting reports from the tour.

The camp also included one current USHL goaltender, David Jacobson. The Calabasas, CA native ('94) spent the second half of this season with the Sioux Falls Stampede as the backup to St. Cloud State commit and draft-eligible goalie Charlie Lindgren. When Jacobson did play, however, he posted excellent stats, and proved he was capable of replacing the loss of Lindgren next season.

Jacobson not only had the best skill set from everyone in the camp, but his off-ice professionalism and leadership qualities were a breath of fresh air. All of the younger goalies looked up to him due to his skills and success at the junior level, and he handled the role of being a leader with class.

The group of 1994-born goalies also included Nick Deery, who spent this past season in the NAHL with Brookings and Odessa.

One very promising 1994-born goalie was Adam Carlson. He spent this past season playing for the Owatonna Steel in the Minnesota Junior Hockey League and had a strong campaign that saw him participate in the league's All-Star Game. His performance was strong enough over the weekend to earn him an invite to the Minnesota Magicians' tryout later this summer.

The class of 1996-born goalies included some solid talent. The most promising one was 6-foot-4 Justin Ball (Coon Rapids HS), a coveted goalie in the Minnesota High School league. A transport from Texas, Ball is looking to play more games as a junior, and potentially make an NAHL team.

Then there was Luke Pickar, who spent this season playing for the Chicago Fury U-16 AAA team. He not only had a successful season, but had one of the strongest resumes in the camp. The other '96 goalie worth noting was Dyllan Lubbesmeyer, who was a sophomore this season for Burnsville High School. "Lubbes" gained a lot of attention from both USHL coaches due to his assertive positioning and his blue-collared work ethic.

The class of 1997-born goalies was very solid. Peter Thome is a 6-2 prospect playing for Benilde St. Margaret, one of the top high schools in Minnesota. His raw skating skills and aggressive, competitive style made him one of the top prospects in the camp. He was joined by California native Boba Jacobson, who is actually the younger brother of David (Sioux Falls Stampede). Boba spent this season playing for the LA Jr. Kings, and was considered the most flexible goalie on the tour. 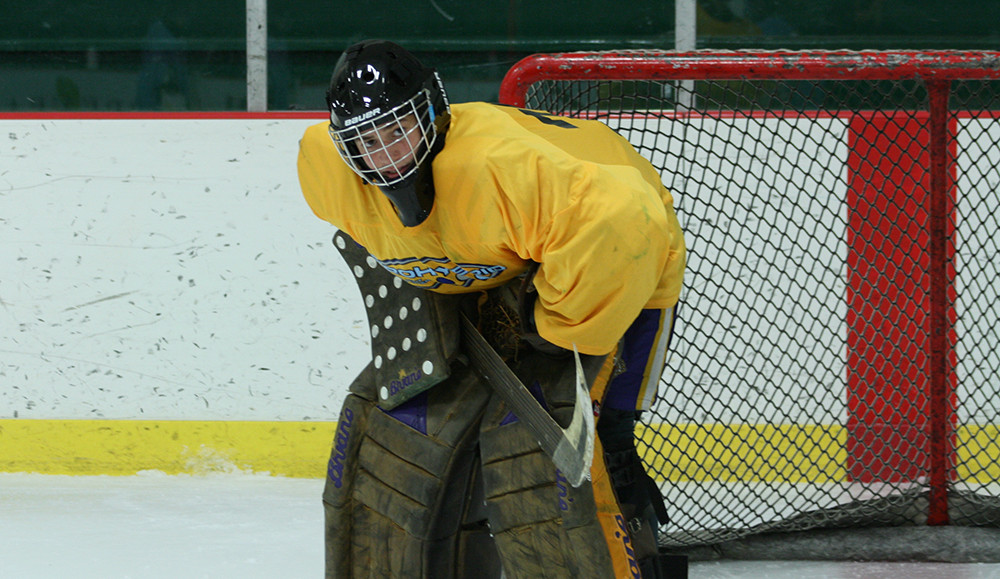 The class of '97 goalies was rounded out with two more promising talents in Will Swanson and Daniel Swail.

The most promising class of goalies in this camp, however, belonged to the youngest group -- the 1998's. This is where I was able to get a great look at Drew Scites, who played for Compuware's AAA Major Bantam team, one of the top teams in the country. He also participated in USA Hockey's Warren Strelow Goaltending Development Program, meaning he was already touted as one of the top goalies in Minnesota for his age.

Scites did not disappoint, as he displayed the durability and strength of a 20-year-old. He scored very well in the off-ice training tests and had the fastest "Herbie" time of anyone else in the camp.

I also had a chance to look at Cole Weaver, who played for Russell Stover's major bantam team this season. Weaver was one of the top skaters in the camp, and he's already being scouted by a handful of WHL teams. His upper body positioning needs a lot of work, but for his age, he has excellent skating fundamentals and a lot of poise in the crease.

Last and certainly not least was New York native Alex Camarre. Not only was he my personal favorite in terms of his on-ice skill and off-ice demeanor, but he works with a very high-level goalie coach in Bob Janosz, who is the assistant goalie coach for the Buffalo Sabres. Camarre displayed excellent footwork and athleticism over the weekend, and despite facing much older shooters, he made some sharp saves due to his excellent reflexes and overall quickness.

Overall, this scouting experience was a very valuable and memorable one. Not only did I get a chance to see more than 20 goalies of all different ages in a short amount of time, but I was able to meet the coaching staffs of two different USHL teams and get to know the coaching staff for one of the top goalie training programs in Minnesota. So much of scouting goalies in the Twin Cities region is about networking, and participating in events like these is a great way to connect.

It not only tested and flexed my goalie scouting skills, but it taught me a lot about the way goalies in Minnesota are trained, and what a couple of USHL coaches expect from their goaltenders.