This was not the headline I wanted to write.

Colorado Avalanche goaltender Sami Aittokallio, who I consider to be one the top four Finnish goalie prospects right now (along with Harri Sateri, Jussi Rynnas, and Riku Helenius), was injured in the third period of his NHL debut on Thursday against the Los Angeles Kings.

When I'm asked to describe Aittokallio, I always start by saying he's the prototypical Finnish prospect.

I say that because of the traits he harvests: quick feet, a lanky frame, an athletic base to his butterfly, a competitive and aggressive edge, and a skating style (shuffles instead of t-pushes) that is currently the strategic blueprint in Finland. 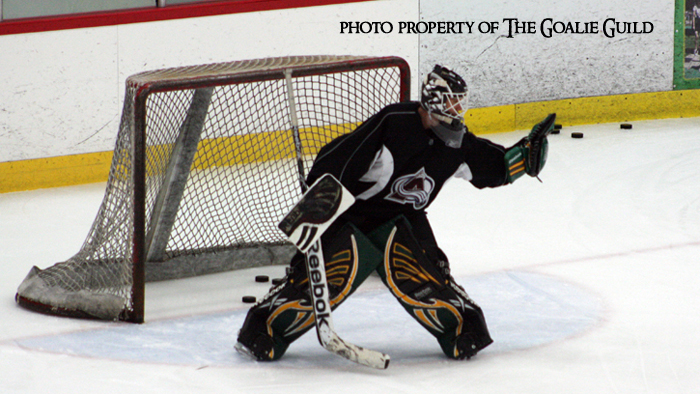 Due to his pedigree, his natural skills, and his success with Team Finland on the international level, ever since the day he was drafted, I've projected him as a long-term NHL starter. He was ranked by Central Scouting as the top international goalie available in the 2010 NHL Entry Draft, and his solid success as a rookie in the AHL is a reflection of his future upside. He's also currently ranked 54th overall in my Top-100 Prospects Rankings.

The main issue is whether or not the Avalanche can develop and establish that potential, or if he'll end up establishing it in another organization.

A team known for being one of the weakest in terms of developing goaltenders, the Avalanche almost never start their third goalie. Part of this is due to the fact their NHL tandem stays relatively healthy, but even when they're eliminated from playoff races or an injury does occur, they never take the opportunity to showcase or evaluate their minor-league talent in meaningless games. This has been going on for many years, ever since the days of David Aebischer, Jeff Hackett, Jose Theodore, and Peter Budaj.

So for them to have given a 20-year-old pro rookie an opportunity to make his NHL debut against the Stanley Cup champions was unprecedented.

Aittokallio was the second-youngest goalie to start a game for Colorado, behind only Marc Denis, who was 19 years old in 1996.

Since Sami was drafted by the Avalanche back in 2010, I had the good fortune of being able to scout and evaluate him during their 2011-12 training camp. The Avs unfortunately never held a development camp that summer, which I considered to be a huge error for an organization that has four rookie goalies behind Semyon Varlamov and J-S Giguere (Aittokallio, Calvin Pickard, Kent Patterson, and Kieran Millan).

I've posted a lot of my thoughts from Sami's first NHL camp in September, 2011, which you can read right here on The Goalie Guild. It includes a short video I put together from the camp, which gives you a few more basic notes on his style.

You can also read and listen to a recap from one of his best performances to date --- a win over Team USA in the 2012 World Junior Championships. Finally, I compared his stance to that of Varlamov's, and posted more notes there as well.

Aittokallio was tested right off the bat due to a penalty by David Jones just three seconds into the game. Considering the nerves and the pressure he was under, I was pretty impressed with his ability to fight through traffic to get his upper body on a few early shots, and his unique footwork was on display right away. He killed off the penalty and weathered the early storm.

Minutes later, Jeff Carter wristed a shot from the middle of the high slot through an Avs defenseman, but Sami squared up nicely and made the save outside of the blue paint without allowing a rebound. A few shifts later, he proved he was not shy to move the puck, as he skated out to the low hash marks to try and clear a puck that landed in the Avs' bench.

On Carter's power-play goal from the right wing at 5:27, Aittokallio was just slightly off his angle. His pads and upper body was opened up towards the middle of the ice, almost as if he was "cheating" just a bit, expecting a pass to Mike Richards, who was cutting through the low slot.

Because Aittokallio wasn't fully square to the puck, the slight deflection off Erik Johnson's stick blade caused the puck to move against Aittokallio's grain, as he dropped and leaned to his right. There was a bit of excess coverage with his right elbow and blocker before the shot was released, which was visual proof he was just an inch or two off his angle.

Most goalies will agree that a shot outside of the faceoff dot (on either side) should be stopped, especially from that severe of an angle, so this was one Aittokallio would want back. And when you're facing a guy like Carter, that 1-2 inches makes all the difference in the world.

On the ensuing shift, a perfectly-executed diving poke check was another display of his aggressive nature, so he did not look rattled or become timid following Carter's goal.

But Richards quickly made it 2-0 when he picked up a loose puck just above the hash marks and fired a wrist shot through traffic and over Aittokallio's glove. Sami was in a deep crouch and up on his skates just inside the blue paint when the shot was fired, but his glove was very low to the ice. When the shot was released, his hand was way too low to react in time to get a piece. This was a high-quality scoring chance off a broken play fired from the "danger zone" through a few bodies, so this was not not one you could fault him for.

Regardless, just 7:14 into the game, Sami had allowed two goals on the first six shots he faced.

But from there, he shut the door in impressive fashion. Even though the crowd was fired up and the Kings had all of the momentum, he staved off the attack and allowed the Avalanche to get back into the game.

The sense I got from watching Aittokallio through the first period was overall consistent with what I had seen at Colorado's training camp in 2011; an aggressive goalie that was not afraid to attack angles, push into shots, and make himself even bigger in the crease. The rebound control was not great, as pucks would come off his pads and land in the slot, but he also made a handful of "breadbasket" saves, where the puck was absorbed into the waist and chest area. That's always a sign of a goalie who is moving with balance and reading plays well.

Aside from the first goal, his positioning and angles was respectable and fairly solid. The first period ended with Sami stopping 13 of 15 shots, which was impressive considering the way the game started.

The Avalanche provided Sami with much more support in the second period. In fact, the Kings did not register a shot for the first 12:54, until Anze Kopitar finally wristed a shot from a bad angle that was gloved down easily. He made a timely save with only nine seconds left in the period, and started the third with 19 saves on 21 shots.

Sami looked much more comfortable in the third period. At this point, I was starting to appreciate his ability to battle on low plays. He was swatting at loose pucks around the crease area, hunching over and flaring his stance and leaning his upper body to either side in order to see around bodies and through traffic, and he had a high level of energy in a game where the Avs were territorially dominant in the second.

Things took a terrible turn for the worse with just over 10 minutes left in the game. He got tangled up with a Kings player, retreated back into his crease, swung his left leg back in order to shuffle post-t0-post, appeared to catch an edge with the heel of his skate, then his leg buckled and he fell over in agony. He had to be helped off the ice with what was labeled a lower-body injury. He did not return, and the Avs ended up losing 3-2 in a shootout.

Since he didn't allow the game-winning goal, he was not the goalie of record, so he finished the game with 23 saves on 25 shots.

In terms of Sami's skating style, there's more to the story beyond his obvious use of shuffles instead of t-pushes. I also noticed that he liked to lift his feet off the ice to make little hop-steps when making micro-adjustments with his angles.

The hop-step is a technique that allows a goalie to move laterally without turning the skate blade or the leg in a t-push motion. Instead, the goalie lifts the outside leg and pushes with the inside leg, then re-gains the edge and squares up. The pads stay facing the puck-carrier, the goalie is able to stay "big" and upright, and depending on the situation, it can be effective in other ways as well.

Because he has a fairly unique skating style, Aittokallio did a good job of staying up on his skates and showing some patience on shots through traffic in this game. This allowed him to track well, meaning he pushed into shots nicely while dropping and creating a seal with the ice. At times this would cause bad rebounds on low shots off the pads, but due to his aggressive nature, rebound control has been the main scouting note against him over the past two years.

While you may see many athletic goalies utilize their flexibility to spread out wide when setting up for a shot, I liked the fact that Sami stayed fairly narrow and upright with his stance. This kept him from getting "locked in" with a wide stance, therefore he could use the shuffles and hop-steps to adjust his lateral positioning with ease and precision. Both goals in the game beat him high to the glove side, so aside from the rebounds, he was solid down low.

Sami holds his glove in a pronounced fashion, placing it high and away from his body with the fingers up. Once he condensed in order to prepare to face a shot, the hand was adjusted so that the palm faced down towards the ice. This is what you are seeing from more and more NHL goalies (Devan Dubnyk, Ben Scrivens, and Brian Elliott, just to name a few). His elbow stayed pretty tucked in, but it was away from his hip, which allowed the hand to be placed well in front of his body.

Ultimately, what I saw in Sami's debut was fairly consistent with what I expected. Quick down low, aggressive, tenacious, and made in the image and likeness of so many raw-skilled Finnish prospects before him.

I still believe he has the potential to be a very solid starting NHL goalie, but I don't believe the Avalanche's weak track record of developing goalies is going to do him any favors. They will give him opportunities since they drafted him high, but he still has a lot of work to do in the technical realm. His rebound control and movements in tight need polishing, his overall mechanics will need to continue to refine, and he will need quality coaching and mentoring as he continues to evolve.

At the tender age of 20, there's no denying his debut was quite impressive.

But what kind of support he receives from the Avalanche and goalie consultant Kirk McLean continues to be the biggest question mark in terms of Sami realizing his true potential.