Petr Mrazek just might be the first goaltender in history to touch four different leagues in under 10 months. From the OHL to the ECHL to the AHL, Mrazek has proved he can win at all three levels.

His final game in juniors came in Game 5 of the OHL's Eastern Conference Finals against Niagara on April 27, 2012. That means he has traversed this amazing path in just nine months and 11 days.

And tonight, he'll have a chance to prove he can win at the highest of all levels --- the NHL.

Mrazek is coming off back-to-back wins in Grand Rapids on Feb. 1 and 2. He was voted as the AHL Goalie of the Week for his efforts, which included a 32-save shutout win over Abbotsford (2/2). That was his first shutout in the AHL, so not only does he make his NHL debut with confidence, but he's seeing the puck very well, stopping 53 of his last 54 shots.

Below is my live updated blog on Mrazek's NHL debut. Enjoy and thanks for reading! 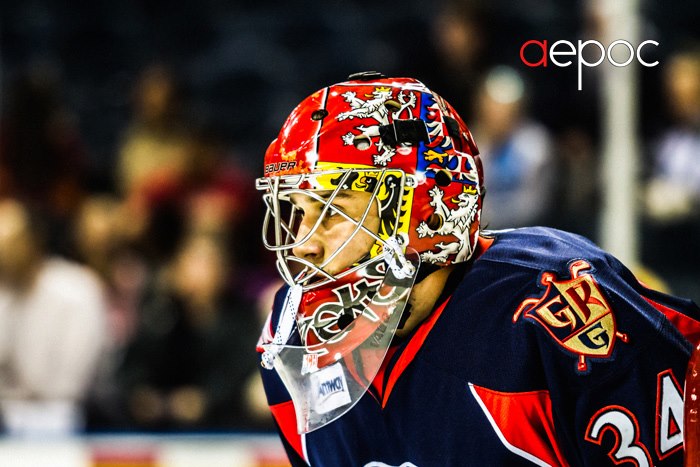 Knowing Mrazek is a very confident goalie with a lot of "swagger" and athleticism in his game, I am interested to see how he moves against speedy talented players like Perron, Tarasenko, Steen, and McDonald. It's always important for aggressive and athletic goalies to contain and control their energy and their movements, so that might be the most important "x-factor" in Mrazek's debut being a successful one.

18:45 -- First test was a save in the VH stance on a severe-angle shot off his left post, and he passed. Welcome to the NHL.

17:45 -- Routine glove save on a low shot on net from inside the blue line. Exactly what a rookie wants in his debut.

17:13 -- Took another shot through a bit of traffic in the stomach and absorbed it nicely, shortly after sealing the left post again on a jam play. He does not look uncomfortable in the early going, and his post coverage on a few early chances has been strong.

14:46 -- Red Wings take a 1-0 lead on a goal by Dan Cleary. Combined with the early routine saves, a lead will help settle whatever nerves Mrazek may have.

13:13 -- Another easy, routine glove save with no traffic, and no issues tracking it into his body.

8:10 -- Detroit takes a 2-0 lead on a seeing-eye wrist shot by Jakub Kindl, which appears to have hit Barret Jackman in the skate or shin pad.

7:44 -- Mrazek displayed real good depth on a wrist shot from the top of the left circle by Steen. He absorbed the shot with McDonald applying a screen...no rebound. He continues to look poised and controlled with his movements.

3:56 -- Mrazek stops a shot from the right half-boards, and once again, there was no rebound or loose change in the crease. Straight back and very still despite the fact he may not have known where the puck was.

3:30 -- Mrazek makes his toughest and best save of the game with a good glove reaction on a wide-open chance on the backhand by McDonald. He took one step out to eliminate some time and space, tracked the play very well, and made a quick reaction to flick out the glove and take away a sure goal.

2:58 -- Detroit turns the puck over twice in their own zone, and Mrazek shows more good left post coverage on a stuff attempt by Alex Pietrangelo. On three separate occasions in the last two shifts, quick hands have covered loose change in the crease after making a save.

Detroit closed the first period on a power play chance, but that was a solid first period from Mrazek. He stopped all nine shots he faced and looked very comfortable and controlled. He only had to make a few difficult stops, but I liked seeing him push out and made himself big on McDonald's prime scoring chance. Overall, to this point, he doesn't appear fazed by the pressure of playing in his NHL debut.

17:30 -- First test in the second period comes, once again, off his left post. But Mrazek sealed the ice well with his pad and kept the skate locked to the inside of the post. A shot on goal was not registered on the play.

14:18 -- Kevin Shattenkirk put a good wrist shot on goal from the low half boards after the Blues won a faceoff to Mrazek's left, but Petr executed a good save selection by utilizing a full butterfly to absorb the shot. No rebound.

11:40 -- Mrazek can't handle a dump-in cleanly and faced some pressure from a strong forecheck, so he fell on the puck and covered it before making things worse. The Blues are starting to apply a bit more pressure and get on their toes a bit more, so this is likely a key part of the game for Mrazek.

11:22 -- Mrazek makes a save on rising wrist shot from Berglund, and gets his body behind the shot despite the fact he couldn't track it cleanly through his defenseman.

10:41 -- Makes a save through traffic on a shot from the right point and gives up a rebound, but no follow-up chance, so no damage done.

5:50 -- Biggest challenge of the game begins with a 4-on-3 advantage for the Blues. Was dropping into the VHS early when the player along his right goal line received the puck, but stayed composed and moved well.

4:15 -- Blues score on the 5-on-4 power play chance when a shot from the point hits bodies in front of the net and bounces directly to Mrazek's right, where Pietrangelo buries a puck with a one-timer from one knee. Mrazek made a desperation save attempt with the paddle of his stick while diving back to his right, but to no avail. Tough break, and not much of a chance to stop that one.

Detroit has done a good job of containing the Blues and keeping most of their shots to the outside. The Blues had more scoring chances in the second period, but Mrazek only had to make a few tough saves.

Overall, this has been a pretty easy night through 40 minutes. Not a lot of tricky shots through screens or odd-man rushes, so he's seeing the puck well and displaying good rebound control. He has looked a bit unsettled on a few dump-ins and passing situations, but that's to be expected in an NHL debut.

With only 17 shots on goal, many of which were very routine, there's not much to write about here. He continues to look poised and fairly comfortable, and he was well-positioned during the Blues' man advantage opportunity. I'll keep an eye on how early he drops into the VHS when shorthanded if that happens in the third period, otherwise he has done his job well and hasn't made any mistakes.

18:46 -- Turnover with a pass off the half boards. He seems to be pretty aggressive coming out to meet pucks above the blue paint, but this was only the fifth or sixth handle he's had to make in this game. Too small of a sample size to get a good read on his overall puck-moving skills.

17:41 -- Good save through traffic while down in the VHS on a wrist shot from Steen from high and outside of the left faceoff circle. It's maybe not the most appropriate save selection, but it was effective. Pucks have stuck to him tonight, especially on low shots.

13:53 -- Good strength down low on a massive scrum in the crease. Continues to carry the label as being "strong down low" from Darren Pang on the Blues' feed.

10:00 -- Blues have out-shot the Red Wings 6-1 to this point in the third and Mrazek looks as comfortable now as he did in the first shift of the game. He seals the ice very well, he has battled hard to stay square to pucks on plays down low

8:24 -- One of Mrazek's best saves of the game came off a hard and heavy slap shot from Alex Steen. He wound up from just inside the left faceoff circle, but Petr flexed it away with the blocker.

3:45 -- Mrazek makes another strong save on the Blues PP, as he gets to the top of the paint and absorbs a shot from the point by Pietrangelo. It was another sign of his aggressive positioning, and his ability to control rebounds.

1:30 -- Another turnover off a clearing attempt off the glass to his left. If there was one negative to his debut, it was the turnovers and bad clearing attempts. But this is to be expected in an NHL debut, and the sample size is too small.

Mrazek certainly benefited from goal support and some early routine saves tonight, but that shouldn't take away from his impressive performance in his NHL debut. He stopped 26 of 27 shots, including all 10 he faced in the third period, as the Red Wings cruised to a 5-1 victory.

Although it's only one game, and one that he was able to easily settle into, it's easy for me to see that Mrazek has a bright future as a starting goalie in the NHL. That role won't fall in his lap, but he made the most of a rare opportunity tonight, and that's going to open up a lot of doors as time goes on.

Aggressive with his angles, strong down low, excellent fast-twitch muscles with his hands, and solid technique. Those are all traits I saw on display in tonight's game.

That being said, I won't be surprised if Babcock goes right back to Petr on Saturday against Edmonton, then gets Jimmy Howard back in goal on Sunday against the Kings.

Congrats to Mrazek on his excellent performance in his NHL debut, and for his continued success in his rookie pro season.