Minnesota Wild prospect Johan Gustafsson had a stellar season for Luleå in the Swedish Hockey League.

He posted a 1.70 goals-against average and .933 save percentage in 33 regular season games, and then a 2.03 GAA and .925 SV% in 15 playoff games. Although his team came up short in the finals to Skelleftea, Gustafsson was widely considered one of the league's best goalies.

Now he's preparing for the next challenge -- making the tricky transition from Sweden to North America. 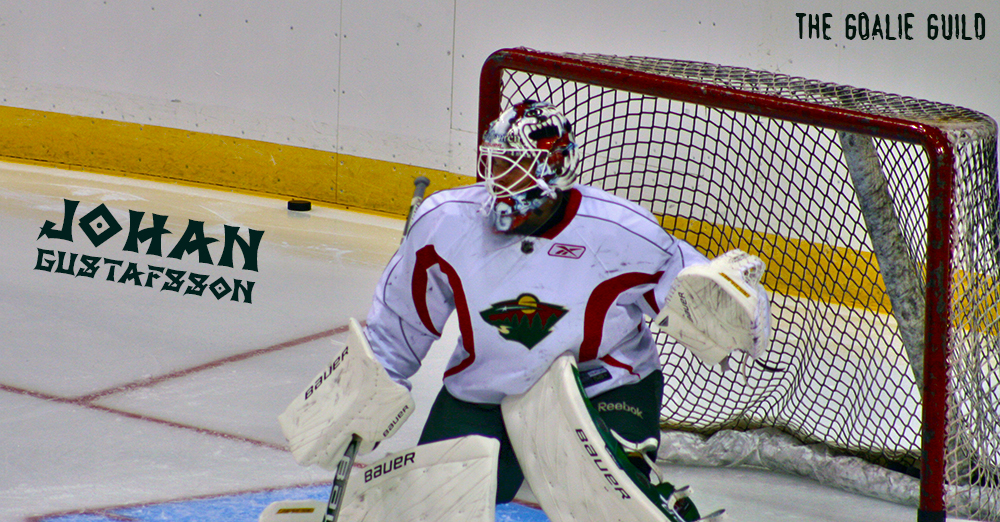 After seeing him perform last week at a second straight development camp, I think Gustafsson is already pretty close to being an NHL-caliber goalie from the knees down.

He's so fluid and seamless when pushing laterally, his edge control is excellent, and he plays with such a deep crouch and wide stance that he's very tough to beat down low. He snaps the knees down to seal the ice quickly, and the amount of time it takes to do this is already reduced compared to most goalies his size because the knees sit low to the ice to begin with.

Gustafsson also has superb range with the leg pads (net coverage from toe to toe) due to his wide butterfly and flexibility. This gives him the luxury of playing deeper, so when he does have to pick up the outside knee to push laterally or back to a post, the distance he travels is reduced, which allows him to appear even "quieter" and more controlled in the crease.

But from the chest to the shoulder blades, it's a bit of a different story. To me, this is the main area of focus for Gustafsson moving forward because he's prone to exposing too much space in the upper corners. And against AHL-calibre shooters that can pick corners with decent accuracy, it's easy for me to say that some adjustments will need to be made as his first season in North America gets underway. 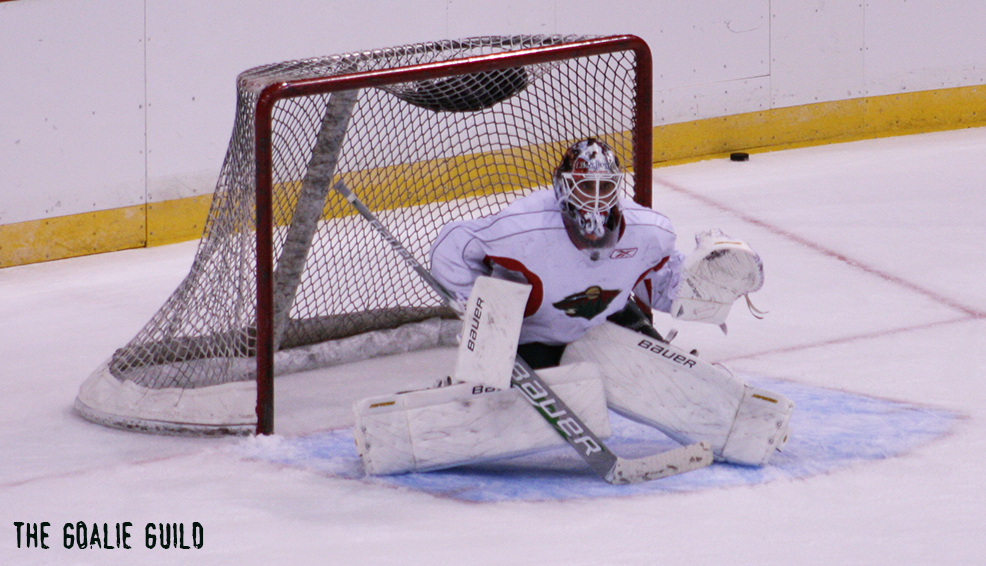 When it comes to discussing Gustafsson's transition to the smaller ice, I want to focus on two key areas: net coverage and space management.

First of all, in terms of space management, I think Gustafsson will need to work on moving and tracking more on his skates, while sliding into angles less. But balancing the volume of up-to-down movements compared to his down-to-up movements is an adjustment that will come once he gets into some AHL games. This is really about reading the play more than anything else, so it's an area that will improve or smooth out over time.

While "dropping early" and exposing space over the shoulders can be due to a variety of different factors, a part of this issue has to do with the width of Gustafsson's stance. At times I've noticed that his own momentum pulls him down and forces him to work harder to stay up as long as possible.

Another aspect that has to be considered here is his posture. Keeping the shoulders as high as possible is more of a challenge when the feet are set so far apart (wide stance). Also, the further the knees are to each other when a goalie drops into the butterfly, the lower his shoulders will sit in the down position.

Also, if his thighs aren't as parallel to his knees as they could be, he'll have a tendency to sink back in his stance, which can also reduce the height of his shoulders and make him look even smaller in net. Same thing happens if his back isn't as straight as possible. This means Gustafsson may need to tweak some things so that his body is more gathered and "collected" in the butterfly.

And the most obvious aspect of all this -- his depth. Even if he can take one step out from where he usually places himself, he'll fill that much more net and take away that much more space from the upper corners.

I'm really interested to see if he ends up changing such a key component of his game. You hear goalies doing this all the time; playing deeper to be more conservative or taking a step out to be a little more aggressive. Sometimes goalies go back and forth between the two "modes" a few times over the course of one or two seasons, while other goalies just stay the same throughout their entire careers. 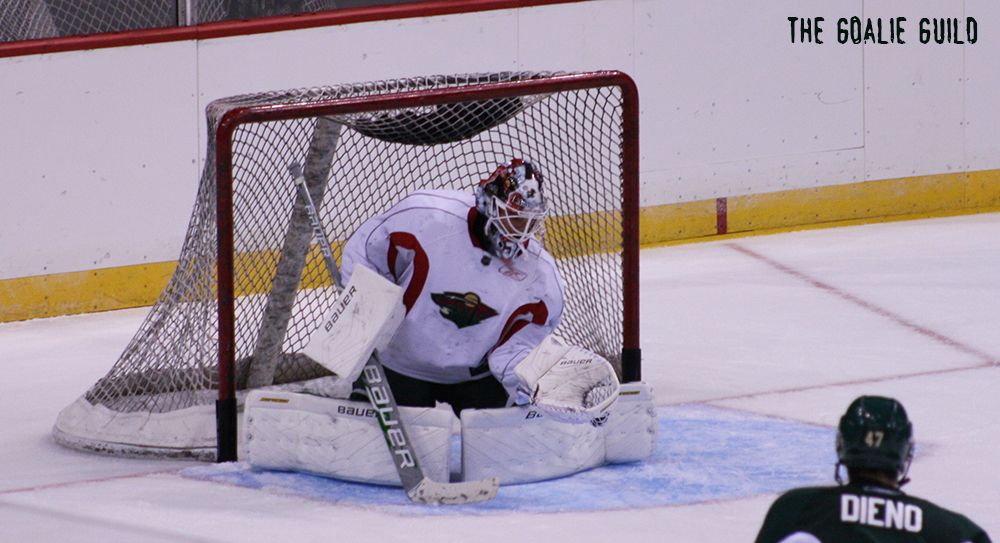 The shot I snagged above is an excellent display of Gustavsson's technical skills on a low shot. He's deep, but the wide butterfly seals the ice from post to post extremely well. There's a tiny gap between the thigh rises, but he has perfect stick placement, and the blocker is tight to his core, eliminating the hole under the arm. The glove is also tight to the body, but still active. The pocket is open and catches the puck cleanly (see below in my additional notes regarding this).

Not only does he have great eye attachment, and the subtle lean of the upper body during shot impact further allowed him to make the catch without having to over-reach or extend the elbow away from the body.

Very quiet, very minimalistic, very clean; this was such an efficient save, and many of the saves he made on low shots throughout camp looked exactly like this.

So while I have no idea how much tweaking he'll need to make, how long it will take for him to feel comfortable, or exactly what tweaks he'll make -- I do know he'll have to make some.

Regardless, from what I have seen over the past two years, I do think Gustafsson is not only ready to make the jump, but I think he'll have his fair share of success in Iowa with Darcy Kuemper.

+ Gustafsson is a "skate-on-post" goalie, which I actually like for him because he can use the post as a spring to gain some depth when passes are made from the goal line to the crease area. It's tougher to do this with the pad inside the post. Being able to gain that depth while keeping the ice sealed and the body in position will be very important as he works towards playing bigger and eliminating space up high.

+ On slap shots from inside the blue line, Gustafsson stayed in the back half of the blue paint and directed pucks away with an active stick and good pad control, as opposed to bringing his hands in front of his body to corral or absorb shots. He did very little reaching, which is a good thing.

+ Speaking of reaching, the picture above shows a good example of how little he reached for a shot that, as you can see, went off the crossbar. The thumb is close to his shoulder, the knees are fairly close together, so he's pretty upright and looks fairly big in there. If you're a Wild fan, you hope to see more of this. Compared to what I usually see, he's also somewhat aggressive with his depth.

+ One of my favorite traits in Gustafsson's game is how the pocket of his glove never closes, yet he still catches pucks pretty well. It's a lot like what you see from Henrik Lundqvist. It's big, open, broad, and takes up a lot of space compared to other gloves out there. Again, this is a key trait to have considering how much I've been focusing on net coverage in the top corners.

+ A casual observer may consider Gustafsson a "drop and block" goalie. While this is not untrue, it's also not completely accurate. Gustafsson does build a very solid wall on shots up to 15-18" off the ice, but I think he's different in the sense that his hands are not rigid. Rather, he keeps the hands close to the body and maintains strong box control, and then extends out only when needed. He does not reach with the blocker, stick, or glove for many shots low and inside the posts unless he has to. Part of this is due to that wide stance and excellent pad reach, so he relies on the pads to take care of business.

+ Gustafsson also had a tendency to bring his knees very tight together when preparing to drop, but before he leaves his feet. Since he builds a very solid wall to seal the six and seven-holes, this pre-shot movement forced the hands to collapse closer towards the middle of his body. So in a sense, he makes himself smaller as he prepares to face a shot. He is the prototypical "inside-out" goalie with his hands, meaning he establishes net coverage from the core, then reacts out when necessary. He'll need to be careful with how the hands are set if he wants to "play bigger" and look bigger in net. And trust me, he will want this since more traffic is headed his way on the smaller ice.

+ You can view the full photo gallery of Gustafsson here. Notice the depth, how his knees are constantly inside the blue paint and the glove is always wide open. You can also read my report on him from last season's camp right here.

Here's a good video from the all-new Iowa Wild website with Mason, as he discusses Gustafsson and some of the adjustments he'll have to make. These type of videos are pure gold for a goalie scout, as they offer rare glimpses into the mind of his goalie coach. Those thoughts will surely work their way up to the coaching staff and management for Iowa and Minnesota, so it's key insight into how he'll be perceived heading into camp.

My Quick Chat With Gustafsson

After the first on-ice session on Tuesday, I had a chance to chat with Gustafsson on a couple of topics. I also got to check out his brand new Bauer Total One pads, which was fun for the gear-head in me.

On his great run with Lulea this past season:
"It was a great year for me to be able to play in 33 regular season games and every playoff game, so it was a good experience for me. I had a better year than my first year up in Lulea, so I think it was a step in the right direction and hopefully I will continue in that direction."

On some technical things he learned in Lulea:
"During this season I had an awesome goalie coach in Daniel Henriksson. He was teaching me a lot, mostly about play around the net and how to get post-to-post quickly and how to stay down on wraparounds. So I've had two really good years with him there. A lot of my success the past two seasons is because of him."

On his current transition to the smaller ice:
"We'll see here. I'm going to come over here for camp and see what happens. The biggest experience for me on the smaller ice was winning the World Championships a few years ago. I was struggling a little bit at the beginning of the tournament but after a couple of games, I felt like it worked out good and hopefully it'll work for me again this season too."

On winning Gold at the World Championships:
"It was amazing. It was a huge win for us over in Sweden for the Swedish Hockey Federation. They had worked so hard to get that Gold Medal, something like 32 years since Sweden last won Gold, so it was a great experience for me. We had a really good team and it felt like all tournament long we had the best team, so I thought that we had a really good tournament and we were all happy with the result."