The data analyst has done the job, performed analysis and the conclusion is in: the team is very good at zone entries.

I go over thought experiments with system play, looking for opportunities to incorporate new ideas into contemporary strategy.

This post is one idea born out of the research of the benefits of controlled zone entries in relation to the propensity for generating shots, scoring chances and ultimately, goals.

You’re likely already aware of Corey Sznajder and the All Three Zones Project that tracked zone entries/exits for the entire 2013-14 season. If not, the data was made available here.

Corey will be doing more intricate work for 2015-16 season with a link in his tweet below.

I'm going to be tracking microstats for the upcoming NHL season & I will make the data publicly available. https://t.co/tMrM7BaJTB

Volumes has been written espousing the benefits of controlled zone entries for shot generation as opposed to dump and chase, highlighting the importance of control in the neutral zone, work built on most notable Carolina Hurricanes Analyst, Eric Tulsky.

Controlled zone exits are desired to optimize neutral zone use and work less for the controlled entry at the opposition blueline.

We all want to believe in the ideal that teams can exit the zone equally with control every time, but the reality is, there are going to be times where the puck can’t be skated out. This can be caused by one of two reasons:

This provides an opportunity to use universal entry/exit philosophy against the users. Dumping the puck out of the zone in desperation or as a last resort is going to happen, likely more often than teams may desire. It’s best to be prepared.

This is the idea behind the Regroup Rope-a-Dope

For illustration here, the play starts as a puck battle in the defensive zone. The play is detailed in an animation below, with the play on the left side, but this can easily be adapted to work on the other side of the zone.

The battle in the corner carries risk and dumping it out of the zone may become the last resort if there’s no clear play to skate it out with control. For coaches, a dump out is a desirable decision, preferring to have a puck battle in the neutral zone, or anywhere outside the defensive zone.

A good zone entry team can set up just inside the blueline fairly quickly, especially since opposition players will have to clear the zone. This time there’s a little twist. The defending RW enters the neutral zone with the lone responsibility of cutting off the cross ice pass to the weak side defenseman. If possible, cutting off the passing lane to the opposition LW would be a bonus, but it’s not a necessity, since the weak side defenseman would have him as his check.

From above, this won’t even register to anyone looking on, scouts, other team personnel, as a strategical maneuver, and may gloss over it entirely, even though the positioning here is vital to the play.

Option 3 is what we are focusing here.

Players on the ice will have to be cognizant of the developing play and in this situation perhaps the RW calls the play after reading the puck retrieving defenseman’s intentions. Do they rope-a-dope or use traditional neutral zone forecheck – that would likely leave holes along the blueline and in my opinion makes the regroup more successful to find an outlet and get back into the zone. Chasing using a NZ forecheck likely forces the defense pairing back into their zone.

Dumping the puck into the zone has one path, either up the strong side where most players are up against the line, or the long route on the other side. Retrieving the dump in should be easier on the defending team, and with the dump in success rate on shot generation diminishing the risk that presented itself during the play in the corner. The likeliest outcome is a more controlled exit from the zone, with speed against the offensive forecheck.

To Rope-a-dope, the defending team wants to provide incentive to localize the play in the rectangle area, with some leeway to keep the regroup shallow, while cutting off the weak side with the winger at about the faceoff circle, ready to cut off a cross ice pass and making the only option a dump in on that side. Giving the defender a quick option (in this case his own RW) along the blueline would be too good to pass up – although the LW in the diagram below should be below the blueline. (note the animation was created using Sportsdood. 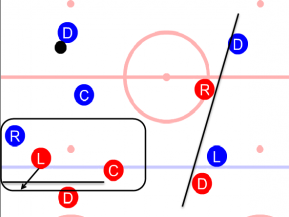 This is where defending team hopes the opposition subscribes heavily enough on controlled entry philosophy and looks to force the entry as a first option rather than dumping it in or retreating into their own zone.

By cutting the ice in half, the puck carrying defenseman has limited outlets in the RW, or C. Using the RW along the wall to draw attention from one of the defenders just inside the zone, to open up to the center. He’s immediately engaged and a pincer movement between the LW, C and D engage the puck carrier and force the turnover at the line.

Meanwhile, the RW in the neutral zone seeing the out manned positional battle and reading the rop-a-dope correctly can cheat toward to the opposition blueline and become a quick strike option. At least, they will force the weak side defenseman to retreat in coverage and effectively removes him from the play altogether.

A quick up and the RW is now in alone on a breakaway or at the very least, taking the play into the opposition zone. The benefit is a potential scoring chance after successfully reacquiring the puck at the blueline using the regrouping team’s momentum against them by stifling the forced entry and sending the puck the other way quick.

Should the quick strike availability turn out as a non-option , the abrupt game flow change captures the former offensive team moving in the wrong direction, requiring a quick stop and retreat back, scrambling to get back into defensive posture.

The result is chaos. Defensive zone chaos. A broken system if you will.

There wasn’t any additional risk added than there was during the initial battle to the corner and in the end, elicited situational risk to the regrouping team.

Clearly there are no guarantees, but if there’s a way to use a team’s steadfast willingness to adhere to a philosophy against them, it’s a worthwhile gamble.

This isn’t a basic strategy or tactic, there’s a lot of moving parts and synchronization required. Complexity makes it difficult to defend against and enticing enough to fall into the trap.

Dumping a puck out of the zone under duress – or as an option – will occur more than teams want, it’s best to use this as an opportunity instead of as a pressure release valve.

Use contemporary zone entry knowledge/philosophy against the regrouping team after a dump out without them realizing they are being manipulated into doing so.

Create a lone option that plays to believe a controlled entry can be achieved.

Use regrouping team’s momentum against them, similar to tipping a person over after they’ve already lost their balance.

At best, a scoring opportunity is created from the turnover and/or defensive zone chaos (breaking a team’s defensive zone system is best achieved by inducing chaos.)