The Montreal Canadiens, who have been characterized as the underdogs throughout the playoffs, are one win away from a trip to the Stanley Cup Final.

This team has pushed the Vegas Golden Knights — a favorite to win it all, who just took down another Cup favorite in the Colorado Avalanche — to the brink of elimination.

How the hell did we get here and what should we be looking at in the first potential elimination game of this series?

This series may not have had as many storylines as other matchups would at this point, and much of that is because it’s not a typical Round 3 matchup of two conference rivals. While the Islanders and Lightning are a rematch of last year’s Eastern Conference Final, here, it’s a meeting of two teams who only last played each other twice in a standard regular season.

This matchup features two teams that couldn’t be more opposite. On one side, it’s a franchise that cherishes tradition and history as one of the Original Six. On the other end of the spectrum, there’s an expansion team in an unconventional market, that’s as untraditional as it gets.

The links tying them together stem from a trade that sent Canadiens’ captain Max Pacioretty to Vegas in exchange for package that included Nick Suzuki.

Pacioretty is now one of the more notable names on the Golden Knights, along with Mark Stone, Alex Pietrangelo, and Marc-Andre Fleury. The Canadiens, on the other hand, don’t have that same level of top-tier talent. Their most notable player is in net in Carey Price, who had some red flags going into the postseason.

Besides injury concerns, Price’s level of play has slipped in the regular season in recent seasons. This year, in 25 games played, he stopped less than 90 percent of the shots he faced in all situations, and allowed 8.11 more goals than expected. It marked the second consecutive season of him falling that far below expectations. And those regular season numbers are why he didn’t rate as a top-10 goaltender.

This year, he’s once again returned to form, saving 7.97 goals more than expected through 16 games. As Alison Lukan analyzed ahead of Round 3, Price has been steady in net and performed well relative to the workload he’s faced. He just hasn’t had the toughest workload compared to his counterparts.

The chart below gives a look at the shot volume and quality (using expected goals as a proxy for quality) he’s faced so far while weighing ice time, along with how he’s performed against it, using score and venue adjusted all situation data from Evolving-Hockey. 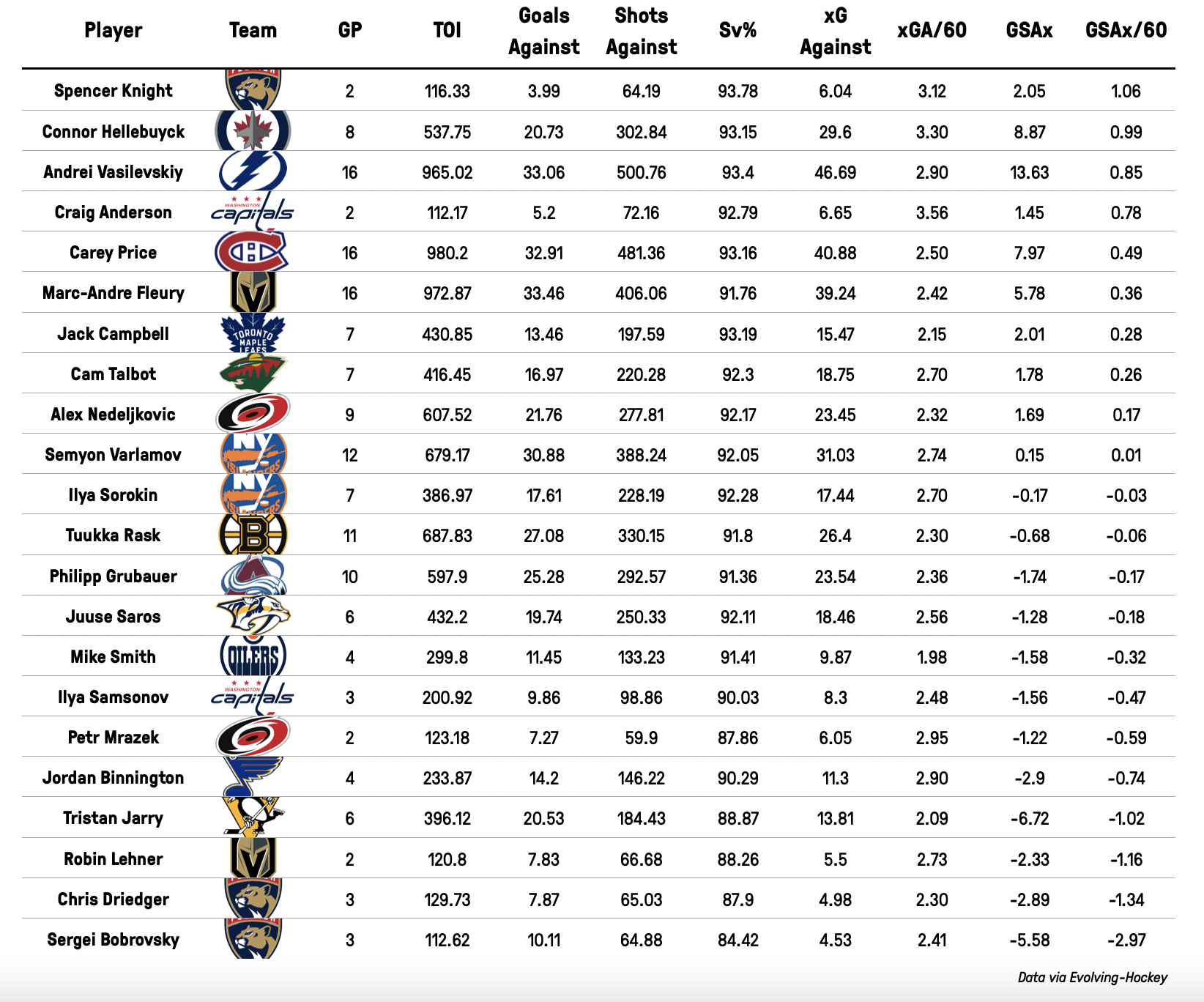 Across the way, the goaltending situation’s a little less cut and dry than Montreal’s.

For the Canadiens’, it’s Price’s crease, period. But, for the Golden Knights, there is an option between two goaltenders. Fleury, a Vezina finalist, got Vegas here with an outstanding regular season, saving a league-leading 19.2 more goals than expected along the way. And he’s continued to be a key reason on why his team is still vying for the Cup this postseason.

But he’s not their only option. Robin Lehner is available, and has started two postseason games so far — one rough go last round versus Colorado, and one solid performance in Montreal in Game 4.

It should be clarified that Fleury isn’t the only reason Vegas could be playing their last game of the season on Thursday, even though soft goals against are the mistakes that stand out and cloud most of our judgements.

If Fleury isn’t in the starter’s paint the next game, it may just be one way for coaches to shake up the team, because the Habs’ problems really aren’t in net, they’re in front of the crease.

Going into this series, Vegas was the stronger team in all aspects. But through these first five games, that hasn’t always been the case.

The Golden Knights’ adaptability stood out in Round 1. After a Game 1 blowout, Vegas adjusted their game to better matchup against the Avalanche. That meant changing matchups, so Mark Stone’s line would go head-to-head with Nathan MacKinnon’s, and adjusting their neutral zone play. Vegas forced Colorado, a team that thrives on their speed and skill, to chip the puck into the offensive zone, and would battle them along the boards when they attempted to retrieve it.

Those adjustments and that pressure won Vegas the series. But the Canadiens are a much different opponent than Colorado.

Montreal isn’t loaded with the same star power, nor do they play the same stylistically, but they do rely on their aggressive forecheck, and play greater than the sum of their parts at even strength. That, paired with Price’s play, helped them get to this point — even while they manage without a head coach behind the bench.

At 5-on-5, this series is closer than what was likely expected even with their playing styles in mind. While Vegas has created a higher percentage of the shot share, the Canadiens have the expected goal edge. Montreal’s finding ways to the quality areas, which is why the average shot distance for Fleury (and Lehner in Game 4) is closer than Price’s; the average goal distance is also a lot closer.

One way to limit those quality chances could be minimizing how much the Golden Knights’ goaltenders play the puck. Against a team like Minnesota, pushing the puck up to their defenders helped spark their transition game, and burn the Wild who thrive off those chances in close. But against Montreal, playing the puck is a lot riskier.

Limiting rebounds is also key. That was a weakness both in the regular season and so far this postseason. From the goaltenders’ perspective, it could be an adjustment to cover the puck more often. But the onus is also on the defense to get closer to the crease, and clear pucks out to avoid allowing close shots from the Canadiens, who keep jumping on them whenever they have the chance.

At 5-on-5, many of those quality chances are coming from their line of Tyler Toffoli, Nick Suzuki, and Cole Caufield. That line is limiting Vegas from creating much in their defensive zone, forcing turnovers (led by Suzuki), and driving play right back up the ice.

Caufield, who wasn’t in the lineup to start the postseason, made his mark through the first two rounds showing another aspect of his game: his passing. Now in this round, he’s putting the skills he’s more known for on display with his finishing ability by increasing both his shot and scoring chance generation.

While Montreal’s best offensive line has hit their stride this series, the Golden Knights’ has struggled. Really, all of their top-six has. Pacioretty’s Game 5 tally was the first score from a top-sixer this round.

Some of the struggles can be contributed to the loss of Chandler Stephenson before Game 5. Stephenson, per data from Corey Sznajder, led the team in passes to high danger areas in the regular season, His absence creates a void in the types of chances Vegas can create. On top of that, without their top line center, players like Nicolas Roy and Keegan Kolesar tried to step up in Stephenson’s place, because despite being down a pivot, and their power play struggling, Cody Glass didn’t draw into the lineup in those games. 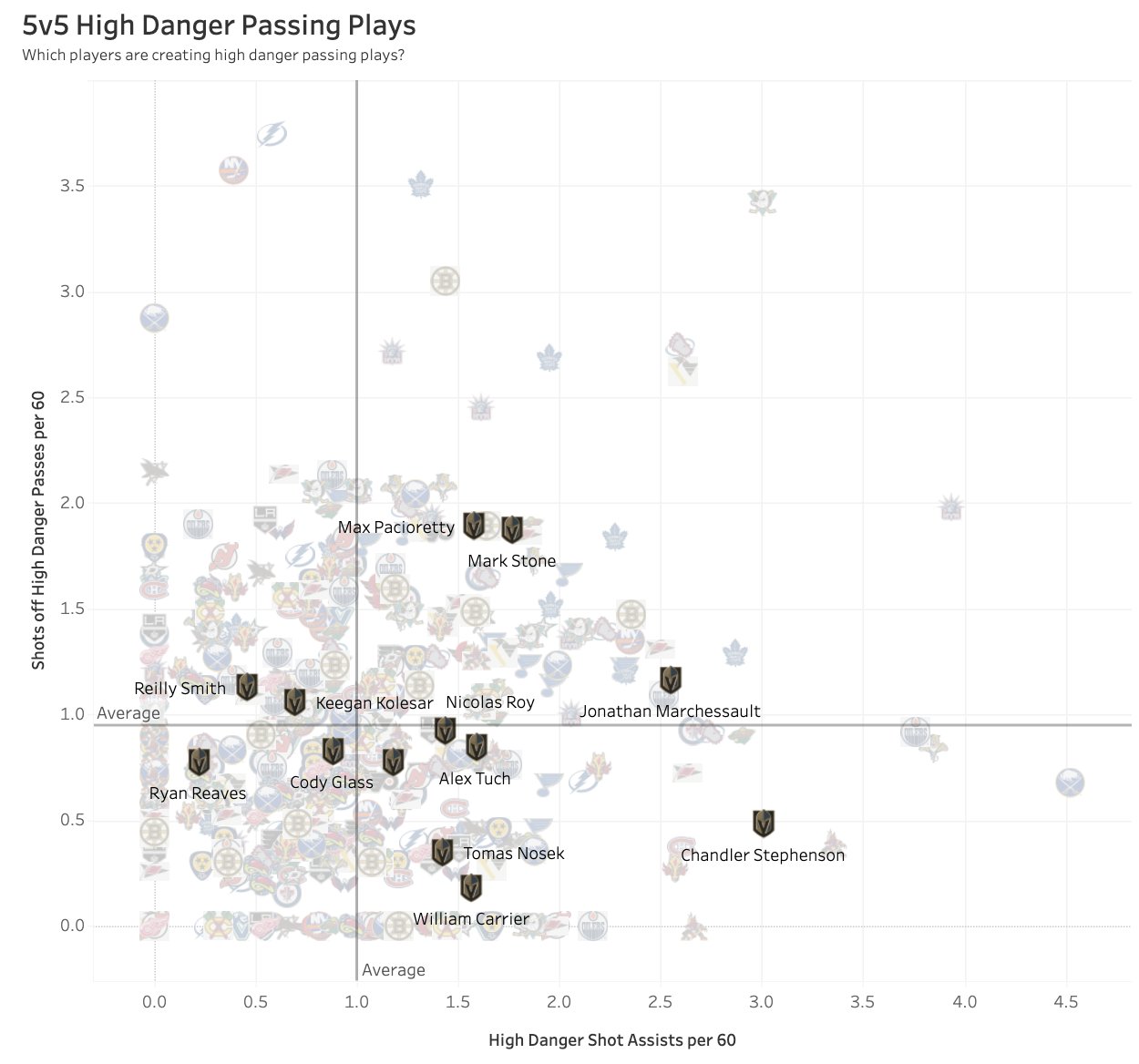 The challenge will be finding a spark before Game 6, even with Stephenson back. Montreal will have more control over the matchups with home ice, which means Stone’s line will likely once again have to try to break through the trio of Artturi Lehkonen, Phillip Danault, and Brendan Gallagher.

Danault may have been a snub for the Selke Trophy this season, but he’s one of the best defensive centers around. And he’s come to play against one of the best two-way wingers in the game. Stone was matched up with him for the majority of his 5-on-5 minutes in Montreal. While he managed that in Game 3, it was a killer in Game 4 when he spent about 75 percent of his minutes against Danault.

To an extent, the Golden Knights obviously need production up and down their lineup — it’s not only on their top players. But it’s extremely problematic to have very little offense from their top players; they have the finishing talent that their bottom-six and blue line doesn’t.

Another area those top players are struggling is on the power play. The Golden Knights may not have operated at the highest power play percentage in the league — their 17.8 percent efficiency rated 22nd in the league — but they did create a lot of shots and quality looks on it. Shooting at just 10.14 percent contributed to their actual scoring rate being as low as it was.

But against Montreal, it’s not just puck luck bringing them down. As the heat map on the right from HockeyViz below reflects in purple, they’re just not taking as many shots from the middle of the ice. That’s quite the change from the regular season, and it’s stunting their game. 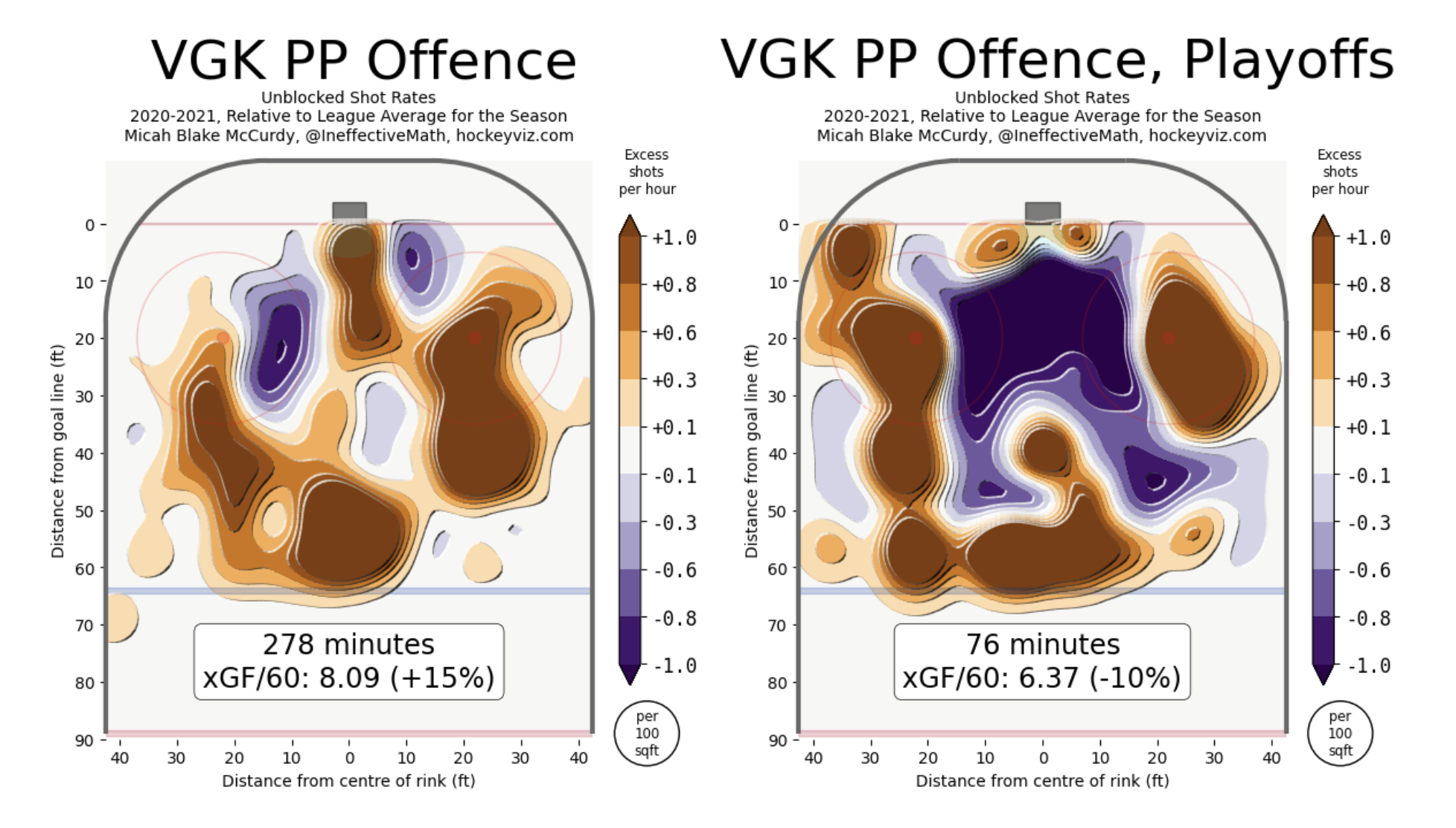 Against this Canadiens team, it hasn’t been easy for them to refine their play on the man-advantage either. Despite few personnel changes, Montreal’s had a strong penalty kill. They may not be generating as many chances for as they did in the regular season, but their box formation has been conservative, and kept their opponents to the outside.

One thing I would like to know is why the Habs penalty kill is so much better in the playoffs. Personnel are the same. pic.twitter.com/JDjgWRPiWw

Teams can sometimes squeak their way out of series without their power play clicking, if other facets of their game are top notch. And in some cases, the reverse can be true too; a very successful power play can help masks weaknesses at 5-on-5 as long as the calls go that team’s way. But struggling to finish at even strength, and floundering on the power play, is a major reason why a favorite like the Golden Knights are on the brink of elimination.

It’s not just Vegas falling short that’s gotten them here, though. Few expected Montreal to get out of Round 1, let alone make it this far. Now, they’ve just five wins away from winning it all.

Data via NaturalStatTrick, Evolving-Hockey, and HockeyViz. Alison Lukan contributed to this story.