Since he came so far in such a short amount of time, there's no denying that Malmo, Sweden native Cristopher Nilstorp was battling some nerves prior to his NHL debut on Sunday, Jan. 20 against the Minnesota Wild.

Even with the nerves, Nilstorp looked smooth and focused during the pre-game warmup. He spent an equal amount of time skating up and down the zone along the near-side boards, stretching in front of Dallas’ bench, and then rotating in and out of the net with Kari Lehtonen.

I also saw him doing some simple breathing exercises, a sure sign that he was no ordinary NHL rookie making his debut; at 28 years of age, and with his may years of pro experience in Sweden, Nilstorp proved that he had a matured mental game. The nerves were an obvious obstacle, but he was prepared to deal with them, and despite the 1-0 loss, it played a role in his successful debut. 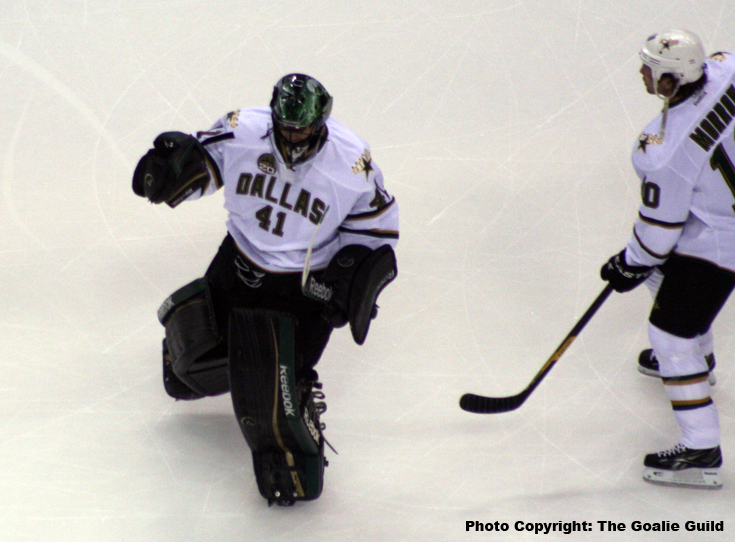 One of the best goalies in the Swedish Elite League over the last two years, Nilstorp won an Elitserien Championship with Farjestad in 2011, and then followed it up with another impressive campaign last season. He posted a 1.90 goals-against average and .928 save percentage in 45 regular season games, then posted a 1.80 GAA and .938 SV% in seven playoff games.

After his game was refined and polished by Farjestad goalie coach Erik Granqvist (known as one of Sweden’s best goalie coaches), the Stars made a great low-risk move by signing Nilstorp to a cost-effective $1 million, one-year contract over the summer.

From there, Nilstorp worked with Stars goalie coach Mike Valley, who also had experience in the Swedish Elite League during his playing career. The combined support of Granqvist and Valley played a vital role in his smooth transition to the smaller ice, which can be a tricky and tedious process for many European goalies.

With a 16-10-0 record, 2.13 GAA, .916 SV%, and four shutouts for the Texas Stars, Nilstorp earned an opportunity to showcase his skills in Dallas' abbreviated training camp. That opportunity was further bolstered by the fact that Richard Bachman had not played at all during the lockout and didn't need to clear waivers in order to get some conditioning in the AHL.

A week later, Nilstorp found himself earning his first NHL start on the road against the upbeat and vastly improved Wild.

Despite the energy in the building, Dallas carried the play for the first few minutes of the game. Cris' first test didn't come until nearly five minutes into the game, when he had to push behind a high shot through traffic that deflected off his right arm. Nilstorp, a southpaw, was picking up the early shots he faced a split second late, but he compensated for the timing issues with razor-sharp reactions.

The early saves helped him settle the nerves, but the pressure mounted quickly when Dallas took a few penalties just 6:47 into the game. While killing a 4-on-3 disadvantage, a Stars player broke his stick, so Nilstorp was called upon to made three superb reflex pad saves on quality shots from the point.

In this type of PK situation, most goalies will be positioned very deep in the crease so they can cover any potential back-door or cross-crease passes. For Nilstorp, this tactic was a significant advantage. His tremendous leg reach and lanky frame allowed him to stretch across with ease, while still having the power to stay upright while moving laterally.

Nilstorp was Dallas' best penalty killer, but shortly after they expired, Zach Parise destroyed a nice setup pass from Pierre-Marc Bouchard at the 8:11 mark and beat Cris clean over the blocker with a perfect one-timer.

After the furious action that led to Parise's first goal in a Wild uniform, Cris expelled whatever nervous energy he had and started to look much more comfortable and controlled in the crease. For him to make those three timely saves on the PK, especially in such a hostile environment, was a real good sign.

Stopping 10-of-11 shots in the first period, Nilstorp faced enough action for me to tell he liked to play a fairly simple game.

From his routine during TV timeouts to his overall technical and positional game, Cris looked very relaxed for a guy making his NHL debut. He nonchalantly skated to the bench, took a few squirts of Gatorade, didn't talk to anyone, stood there for about 15 seconds, then skated around the faceoff circle before returning to his crease.

He did the same thing on every TV timeout, another sign he had a strong "pro" mentality.

During the first intermission, I chatted with Stars goalie coach Mike Valley. We were both impressed with his early body of work, as we discussed how he looked "pretty calm" in there. I asked what he thought the biggest change was in Cris' game from September to right now, and his answer was simple.

Being able to "activate" the hands, or simply push them slightly in front of the body, is an aspect of positioning that goalies are more focused on now than ever before. This subtle adjustment creates more room or more "range of motion" for a goalie to react with their hands, which improves their ability to take away time and space from a shooter.

And in the NHL, where shots are that much faster and tougher to track compared to the AHL, even the slightest adjustment to make the hands more active can make a world of difference. This is especially true for a Swedish goalie that may be used to playing a bit more of a blocking style.

In the second period, Nilstorp really started to hit his stride. One of his best stops all night long was a push across his crease to make a left toe save on a Dany Heatley one-timer. Then he made a solid right shoulder save on a Clayton Stoner one-timer. The more shots he faced, the more comfortable he became, and the smoother he looked.

He stopped all 10 shots he faced in the second period and was gaining more confidence as well.

One area of Nilstorp's game I really liked was his ability to push behind shots and use his upper body to take away space. In my opinion, his ability to get a shoulder or an arm behind elevated shots was a sign he was reading plays very well. To be able to do this in his NHL debut was another tell-tale sign he could not only hang at that level, but continue to have success as time goes on.

He wasn't picking up shots late anymore, and he was reading plays with poise and good patience.

Another positive trait about Nilstorp; he's most certainly a big goalie at 6-foot-4, but he was also very fluid with his movements. His butterfly slides were smooth, he recovered with balance, and he didn't over-slide angles or slip out with his edges, either.

Minnesota carried the play for most of the third period, out-shooting the Stars 11-5. But Nilstorp continued to prove his NHL upside by displaying a solid combination of technical consistency and athleticism. His maturity was also very apparent throughout the game, as he never appeared hesitant or fazed by odd-man rushes.

One final note I made regarding his overall performance was his ability to direct pucks off his body with a lot of confidence. Whether it was a high shot off the chest or low shots along the ice from severe angles that he had to kick to the corners, he kept pucks and rebounds away from the center of the ice.

So aside from the first 10-12 minutes of the game, Nilstorp never looked out of place. By the end of the game, I was fully confident that he could play in the NHL on a full-time basis.

The burning question is this: does he have "starter" upside?

But from what I saw on Sunday night, I'd have to think that he's only going to get better, and he's going to attract a number of NHL teams that might be looking for a mature, big Swedish goalie. 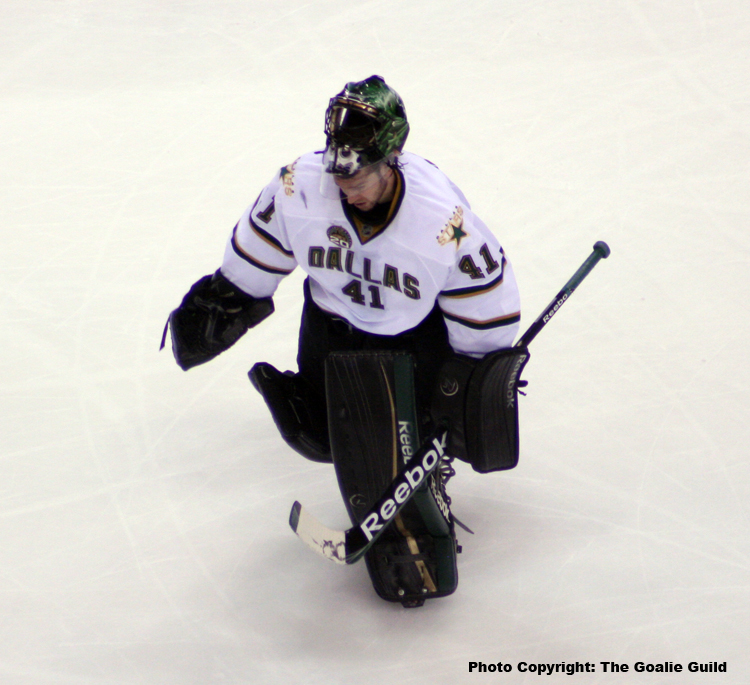 By finishing with 30 saves on 31 shots, his near-flawless NHL debut left me with one lasting impression:

He is proof that the process works.

This process, which is simple by design, is never easy to execute, let alone execute successfully:

Let a European goalie develop in his homeland until he's a more mature and consistent performer in his mid-20's. Then sign him as a free agent for a cheap short-term deal, start him off in the AHL, and give him a few months to get comfortable on the smaller ice.

If he can make that transition successfully, then bring him up when the opportunity arises, and let him showcase his skills against NHL talent. He'll be more relaxed than a guy in his early 20's (or a guy that was drafted in the first few rounds), therefore more focused and relaxed, and ultimately more likely to have success.

I feel there's a certain obsession or fixation in today's game on hitting the "home run" for finding or developing a long-term starting goalie. Everyone is looking for the next Patrick Roy or Martin Brodeur, but I think those days are over.

The game is different. The way goalies develop is different. The path to the top, and staying on top, is more difficult than ever before. So instead of demanding a goalie to succeed in their early-20's and play at a high level for 15 years, I feel the best course of action is to scout and track European goalies into their mid-20's, then sign them as free agents when they're older.

It made me think of another Swedish goalie that had a similar frame and path to the NHL in Jonas Gustavsson. Also a product of Granqvist and BK Farjestad, Gustavsson signed with Toronto after a strong playoff run in the SEL a few years back.

But he was much younger than Nilstorp, and the Leafs made the mistake of not giving him any time to acclimate in the AHL. By putting him straight into the NHL, they rushed the process and he didn't develop properly. He didn't gain the confidence needed to overcome some bad games, and I don't think he was mature enough to handle the adversity and pressures that come with a tough market like Toronto.

There's also the whole dynamic of Francois Allaire's coaching style, but that's another story for another day.

Either way, in Nilstorp's case, the process worked to perfection for Valley and the Stars. And if Nilstorp continues to play at the same level he displayed in Minnesota, the Stars could soon find themselves with one of the best tandems in the NHL.