It was quite the whirlwind year for Devon Levi. A late 2001, he appears to be a classic late bloomer. He was playing midget hockey in Quebec one year ago. Fast forward to the 2019/20 season and he is dominating the CCHL, having one of the better seasons in league history. Not only did he sweep the CCHL awards, he also swept the CJHL awards (for all of junior A hockey in Canada), capturing goaltender of the year and the MVP. Recent CJHL MVP’s include the likes of Cale Makar and Alex Newhook.

Levi also was a standout at the World Junior A Challenge, helping Canada East surprise as tournament runner-up. This is a tournament that has many high-end draft eligible players and Levi was the MVP. To top it off, he is headed to a quality NCAA program at Northeastern next year. Even if he has come out of nowhere this year, and he is undersized by today’s goaltending standards, Levi has to be considered a strong candidate for the middle rounds and a potential NHL netminder down the line. 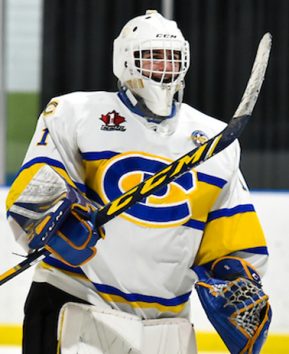 Athleticism/Quickness/Speed: Without possessing elite size, Levi makes up for it by being extremely athletic and quick in the crease. He generates a lot of power in his pushes post to post, allowing him to quickly react if needed. He also is graceful moving both backwards and forwards, allowing him to challenge shooters aggressively to make up for his smaller frame. Grade: 55

Compete/Temperament: Levi was a consistent rock for Carleton Place in the CCHL this year, performing at an elite level all year. He also showed extremely well at the World Junior A Challenge. In his first international performance, he was not the least bit phased or overwhelmed and ended up being the tournament MVP. He seems to have a very strong mental fortitude. Grade: 55

Vision/Play Reading: Levi tracks the play very well, using his quickness in the crease to cover his angles and track the play. He has a penchant for making highlight reel saves going post to post because of his strong reads and anticipation. He also showed well in the shootout at the World Junior A Challenge, remaining composed in the crease, forcing shooters to make the first move. Grade: 55

Technique/Style: If there is one thing that average sized or smaller goaltenders need, it is strong positioning. There is greater room for error if their angles are not perfect, or they drop down to the butterfly too early. Levi shows very well in this regard. He stays square to shooters, rarely overcommitting. He is aggressive in coming out to the top of his paint to cut down angles, trusting his athleticism should he need to recover. He keeps his body compact when moving and does a great job of fighting through traffic to make saves. Grade: 55

Rebound Control: Nearly all young goaltenders need refinement in their rebound control and Levi is no different. He has quick pads, but occasionally he relies on his athleticism to make saves which can kick pucks back into the slot. As an undersized goalie, he also needs to do better limiting second chances from outside shots as he fights through screens to secure pucks. Grade: 50

Puck Handling: Levi is not a standout either way as a puck handler. When he needs to, he will make a play on the puck to help out his defense. However, he does not exhibit extreme confidence, nor is he aggressive in leaving his crease to make a play. Grade: 45