To say change has been the norm for Sven Andrighetto the last few seasons is putting it lightly. 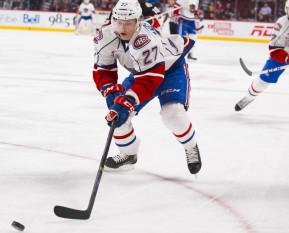 Playing in Switzerland, he was ignored in the 2011 NHL Entry Draft after having turned 18 in March of that year. So he packed his bags for Rouyn-Noranda, Quebec, suiting up for the QMJHL’s Huskies the following year in hopes of raising his stock. There, despite impressively posting 36 goals and 74 points in 62 games as a CHL rookie, he was again ignored.

Andrighetto didn’t give up and fly home like many of his European counterparts. Instead, he improved on his exploits of the year prior with the Huskies, putting up 98 points in 53 contests before adding 30 points in 14 playoff games and catching the eye of Montreal Canadiens scouts enough for the team to select him in the third round of the 2013 draft.

An advantage to his already being 20 years old at the time of his selection is that the Habs were able to assign Andrighetto immediately to the AHL’s Hamilton Bulldogs. After playing his way on to the roster, the Sumiswald, Switzerland native quickly climbed the depth chart, rising to a top line beside the struggling Martin St. Pierre and opposite sophomore Christian Thomas, and by mid-year taking over as the sparkplug igniting the team’s offense. Had the season gone on even five more games, there is little doubt he’d have overtaken St. Pierre to lead the club in scoring as a rookie, especially as the team’s captain struggled and toiled on a third line, while Andrighetto was temporarily shifted to centre to load up a unit on a scoring-starved squad.

One would think it was a relief for Andrighetto to enter his second American Hockey League season knowing just what to expect for a change. Then came training camp in Montreal and, unexpectedly, what seemed like a brief, longshot experiment the year prior was revisited. Despite the abundance of veterans capable of playing centre, young Andrighetto found himself slotted down the middle.

There’s nothing about Andrighetto, who has always been a winger, that screams he’d be better off at another position. He typically generates his offense from his sheer skill and quick hands, speedily bursting down a wing and weaving between defenders – without hesitation always confidently challenging anyone between himself and the net – before letting of his heavy wrister.

In fact, if there are knocks on Andrighetto, it’s his lack of size and strength, and at times his play in his own end, all elements one looks for in an ideal centre. Perhaps, then, the Canadiens organization wanted him to play in the middle to make give him more derensive responsibility and make him more aware of requirements in his own end? Not so, says his coach Sylvain Lefebvre.

“It’s not [an experiment]. He’s gonna play centre,” proclaimed Lefebvre following the team’s home opener this year. “He’s doing well enough to stay there. We think he’s got the speed; he touches the puck more often and he can make plays. We figured as an organization that his chances to make the NHL are better playing centre.”

In the season opener, Andrighetto was given bigger veteran bodies as his flanks, with Eric Tangradi and Drayson Bowman lining up by his sides. With the club trailing in the third and needing a spark, Lefebvre shuffled the deck, instead giving the new centre a pair of skilled rookies to work with in Charles Hudon and Dan Carr. The change paid dividends quickly, as while Andrighetto wouldn’t get on the scoresheets, his threatening presence helped create space for a Hudon centering pass to find Carr in front of the goal only seconds after captain Gabriel Dumont had tied the game, resulting in what would end up the game-winner.

And yet before game two, there was another change. The Canadiens sent Michael Bournival down to Hamilton, bumping Carr off the newly assembled top line. The new trio combined for the first home goal of the year for the team, with Bournival finding the back of the net, while Andrighetto would bury his first of the season on the powerplay, where he was re-paired with the wingers between which he had started the year.

“Tangradi is a big guy; he can skate well, shoot the puck, and sees the ice well. He [creates] room for his linemates,” said Andrighetto of the benefit of playing with a bigger body for a small forward like himself. But on this particular goal, it didn’t really matter who else was on the ice. A solo effort saw him carry a puck end to end before cutting to the goal and narrowly failing to stuff it in short side. “I was a little mad I didn’t bury there, but I got the puck back and Tangradi had a great screen in front of the goal,” he explained of his second effort on which his release evaded Toronto netminder Antoine Bibeau to put his team ahead 2-1 at the time.

In week three of their season, the ‘Dogs faced their first three-games-in-three-nights stretch, and keeping Andrighetto with consistent linemates proved effective, as he found the back of the net on each of the first two outings. With Bournival scratched on the Sunday in preparation for a call-up to Montreal, the Andrighetto line was restructured to its most diminutive composition to date, as Christian Thomas was lined up opposite Hudon.

Though that spelled essentially a fourth different look for Andrighetto through only six games (and those all spent playing centre), his line remained the only one capable of consistently producing, as a cycle between the Hudon and Andrighetto found Thomas alone in the slot, and even though the sniper flubbed his shot, it bounced up high and over goalie Dan Ellis, landing beyond the goal line.

Thomas and Andrighetto have of course developed some familiarity with one another, but is there a new challenge for a winger in playing with a centre of little experience at the position? “I think it’s great. [Sven] likes to hold on to the puck, make plays, and use his speed. I try to do the same thing, as does Hudon. It’s a good line and working pretty well,” assured Thomas after the trio’s first full game together, a 5-2 loss to San Antonio.

And about all three being well under the 6’0” mark? Again Thomas didn’t seem concerned. “I don’t think it’s a problem. Especially the way we play. Quick defense, try to score a goal, and make some plays.”

Despite his coach’s earlier assertions and the projections of many for him to lead the Bulldogs in scoring this year, Andrighetto’s path to the NHL isn’t a clear or easy one at this point. There are organizations (Calgary, Buffalo, Carolina…) where it’s likely he would’ve already been given a look on the biggest of stages, but with the Canadiens acknowledging a need to get a little bigger at forward, it was already going to be tough for the shifty 5’10” prospect, and that was when he was at wing. The odds of him suiting up in Montreal at centre before he turns 22 in March seem slim, particularly when one consider the Canadiens’ desire to eventually move Alex Galchenyuk to that position, and the fact that Andrighetto’s own strengths mean he’s best fit for a first or second line.

Due to the size comparisons, it’d be easy to think the Canadiens are grooming Andrighetto as an eventual replacement for David Desharnais (and since having both at centre would make for a very small team down the middle), but the two are in fact very different players. While Desharnais is a complimentary player in the sense that he most often requires a big, strong triggerman to finish plays, Andrighetto is the straw that stirs his line’s drink, adept at finding the open man, but more often turning heads with his individual efforts that give himself the extra room necessary to generate high percentage scoring chances. A big compliment, and not that he has potential to be anywhere near as good, but one might say there’s some Patrick Kane to his game.

For the Canadiens, keeping close tabs on Andrighetto’s development this year will be important. There was talk that Colorado had asked for his services along with those of Rene Bourque in return for P.A. Parenteau close to last year’s trade deadline, but that Marc Bergevin had declined the offer. By March of this year, teams will be all the more aware of what the former WJC star can do at the professional level, and if the club hasn’t found a way to fit him into the eventual contender puzzle, he might become a tantalizing target for another team that has what Montreal is looking for. After all, if there wasn’t more change around the corner, we wouldn’t be talking about Sven Andrighetto.