No one has scored a power-play goal against the New York Islanders in the Lane Lambert era.

Granted, there's a sample size discussion to be had here. While it's early in the season, the Isles have been shorthanded a total of 25 times for an average of just over six minutes per game, a number good enough for ninth in the league so far this year.

Lambert and his staff haven't reinvented the wheel. Rather, they've tossed their own wrinkles into a penalty kill structure that has been successfully employed across many eras of the game. It is equal parts patient and chaotic in its approach. Most importantly, it seems to be the perfect fit for the style of player Lambert & co. have employed within the system.

The Wedge Plus One is a system that has multiple goals within a four-man squad. It seeks to rob opposing man-advantage units of prime real estate in front of the net and in the slot area while simultaneously letting one player run amok in an attempt to disrupt the pace and quarterbacking of the at the top of the point. This system requires a high level of chemistry between the penalty killers. As we'll see in the video, a variety of reads are necessary to provide the proper pressure and ensure the critical areas of the ice are covered.

Before we get to the video, let's take a look at this system as it appears on paper so we can understand where players should be and what the base function is of the structure. 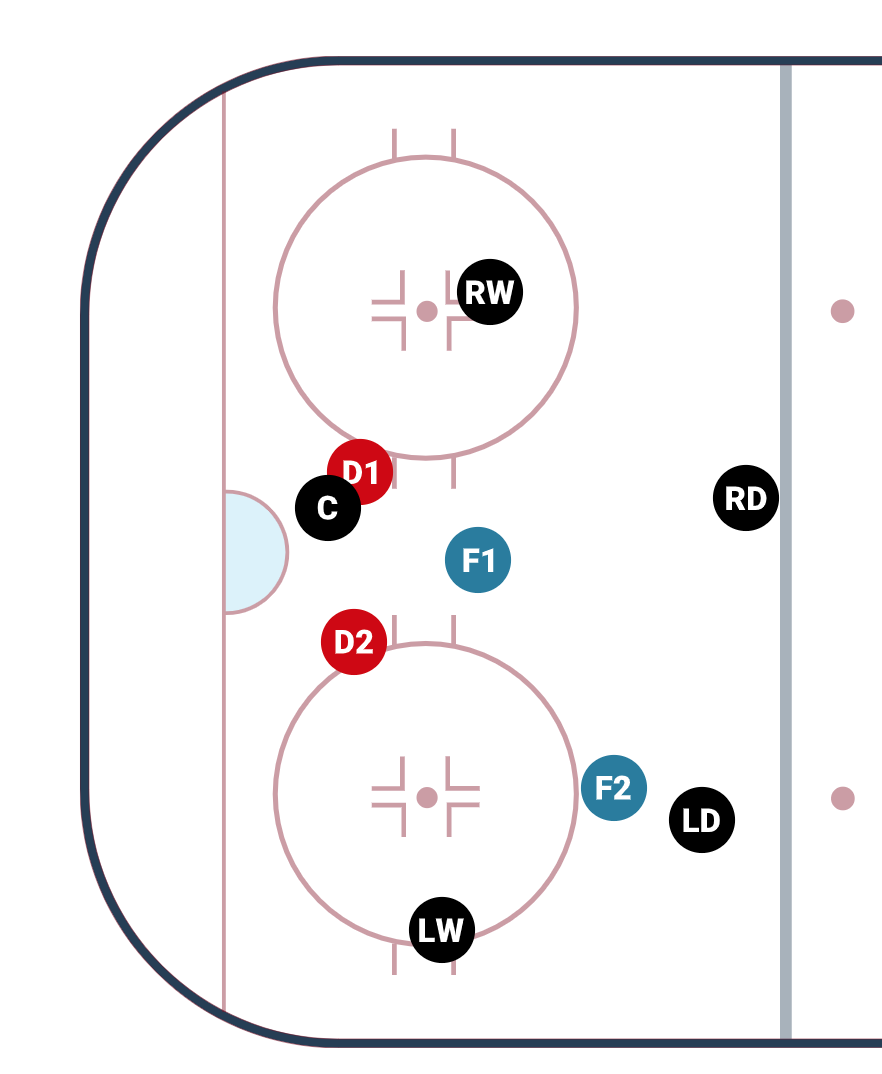 This structure is called a Wedge Plus One because that's exactly how it appears on paper. The wedge is a three-player triangle in front of the net that extends into the slot area and "wedges" out any player that attempts to enter the middle of the triangle. This robs teams of the ability to put a one-timer option directly in the middle of the slot. By fixing a player there, the power play nearly negates their personnel advantage by having one player eaten up by the wedge.

At the top of the system sits the plus one of the group. This player's responsibility is to disrupt the quarterbacks of the power play and force them into making decisions they aren't comfortable with. In short, they are a complete wrecking ball. They are designed to create chaos and prevent the opposing team from operating at their preferred pace.

It's important to note that the plus one will change throughout the kill. It is not always the same person. If the second forward within the wedge has a better play on attacking the puck, the forwards will swap out mid-kill and exchange spots with each other. This will also take place if the plus one needs a break and has been pressing for some time. Exchanges in plus one happen based on coverage or how winded a player might be.

To get a sense of how this coverage works on the ice, let's take a look at a short clip that shows the Islanders mid-kill. Within the video, I've made callouts to points where the plus one is changing based on the flow of the play. You can see the Islanders orchestrate this read very well, it's a seamless execution that affords the opponent no time or space.

The reason these player exchanges within the system are so important is that the low forward in the wedge, often referred to as the "sagging forward," has a lot of responsibility in covering the back door and reverse angles of the play. If this exchange is not clean and these reads are not made appropriately, opportunities for scoring chances can manifest out of nowhere due to bad coverage.

That clip does a great job exemplifying why it can be so difficult to find space in high-traffic areas against the Islander's penalty kill. The wedge eats up a ton of space in important scoring areas and the plus one is busy forcing the puck to the exterior of the ice.

Another area of strength for the Islanders has been in how they approach draws and evaluate when it's time to press the opponent hard versus back up and enter into the preferred penalty killing structure. Off of this faceoff in the defensive zone, you'll see both Islander forwards press up ice to form a big box structure. This is because they aren't yet sure who will manifest as the power-play quarterback. Until its clear where this play is headed, the Islanders will hold off on splitting up into their Wedge Plus One structure.

Once the play establishes and the opposing power-play takes shape, the Islanders will establish the system and establish their wedge. The timing of this is, once again, the strongest part of this system.

This is a very neat bit of business by the Islanders to make the right read in not only how they approach the system and enter into it, but again how they identify times to swap plus ones and maintain wedge structure at critical moments of the opposing power play. These adherences to the system in an early stage of the season with a new coaching staff are, to me, quite remarkable. Jean-Gabriel Pageau and Zach Parise, the forward ice-time leaders on the Islander's penalty kill, have been leading the charge in this area.

The main variations on this system I have seen from Lambert's staff have been a reservation around letting the defensemen be the ones to do the chasing out of the wedge. You're going to rarely see defensemen act as a plus one. The forwards will do the bulk of the skating. The preference seems to be to keep the defensemen at home within the wedge.

Another variation is in mitigating zone entries. The Islanders will often stack three players at the blueline to clog things up on zone entries, but when the opportunity presents itself, they'll start forechecking deep within the opposing team's zone and layer their pressure player after player to create a lot of chaos in the neutral zone. Take a look at the next clip to see them harassing the puck carriers all the way up the ice.

That constant pressure is enough to disrupt what Victor Hedman and the Lightning are attempting to do on the power play and forces them to retreat deep into their own zone, wasting valuable time to reset and try everything over again from scratch. These seconds add up on a penalty kill. The Islanders are successful in part because they force teams to regroup and try basic zone entry techniques multiple times.

That isn't the only area they've added their own bit of flair to. You'll also see Islanders players swarm the puck when they have an opportunity to win a board battle and clear the puck out of the zone. The idea here is to create situations where you possess a manpower advantage despite the fact that you're shorthanded and killing a penalty.

For instance, your team may be facing a four-on-five situation, but if the puck skirts to the boards and is up for grabs, you can easily use a system like a wedge to create a puck battle that features and three-on-two advantage for your own team. Or, at the very least, a three-on-three, even-up opportunity to win a loose puck.

Take a look at the Islander's response in the next clip. When given the chance to pounce on a loose puck and negate the other team's advantage, they take it and earn a strong clearing attempt. Also, keep an eye on the behavior of the plus one. As this clearing attempt matriculates, they make a correct read in pinching up ice to further disrupt the play.

Penalty killing isn't something that is limited to the defensive zone. As you can see from these clips, a successful penalty kill is one that makes life easy for a goaltender, minimizes chances from high-danger areas, and doesn't allow the opponent any time to feel comfortable in any phase of the game. The Islanders are cooking with a bit of all of that courtesy of the Wedge Plus One structure and their adherence to it.

A final note about goaltending as it's truly the bedrock of any good penalty kill. You cannot successfully kill off 25 straight power play attempts with poor goaltending. While the Islanders system is working, it isn't immune to turnovers or missed assignments. There have been a few, and Ilya Sorokin leads the NHL with 4.24 raw goals saved above average in all penalty kill situations. That's in just over 32 minutes of power-play time, so he's not gone without tests in that regard.

Pair this high-pressure system with some above-average goaltending and you have a recipe for future success. As the Islanders' streak continues, keep an eye on how they're employing these strategies and driving a direct wedge into opposing power-play attempts.