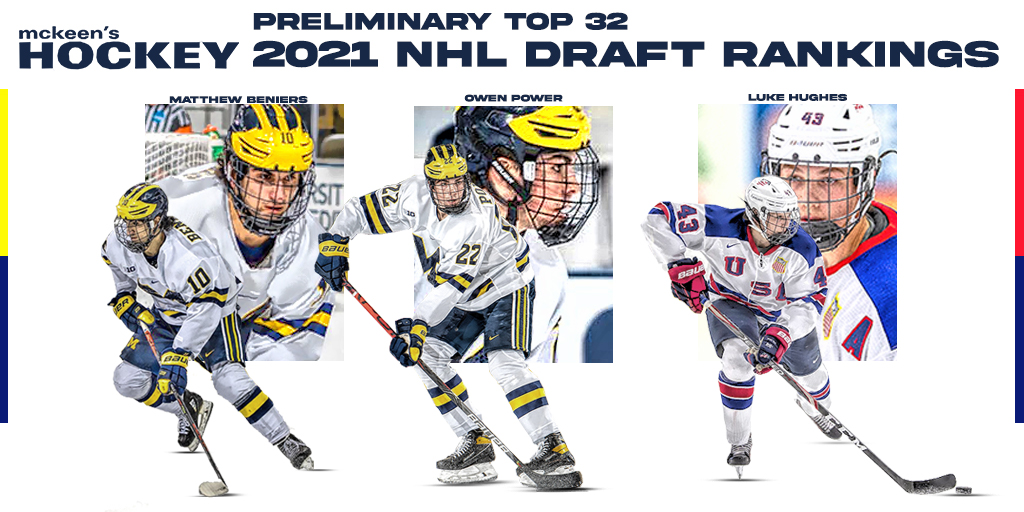 It has certainly not been a normal year in the world of scouting. The state of hockey (more specifically junior hockey) is in flux around the globe and it has made assessing the 2021 NHL Draft a difficult and arduous task. Usually, by now, McKeen’s would have released our mid-term draft list of 62 names (or in the case of this year, 64), projecting the top two rounds of the upcoming draft. Our preliminary list would have normally been released in November. Yet, here we are in February releasing our initial ranking for 2021.

We chose to delay the release of our preliminary ranking to ensure that more top players had the opportunity to play this season and so that our scouts had longer to try to assess the top talent in their regions. However, due to the fact that the OHL and WHL have yet to start this season, and many other leagues have had delays or stoppages (such as the Finnish and Swedish junior leagues), we chose to cap this preliminary list at 32, projecting only the first round. In the coming months, our scouts will be hard at work in their regions, adding names and evaluations to their notes. Additionally, in that time, hopefully more leagues in North America are able to commence, specifically the WHL and OHL. As such, our next list will stretch to a top 64, or perhaps further.

With that in mind, we hope that you enjoy our preliminary draft ranking for 2021 and feel that it has been worth the wait.

Dominating this list is the United States and Sweden, with nearly half (14) of the players ranked coming from those two regions. Consequently, Finland and Russia’s presence is surprisingly low (2 players listed), in what looks to be a down year for both countries.

In terms of a positional breakdown, the list contains 21 forwards, 9 defenders, and 2 goaltenders. Noteworthy, however, is the fact that defenders are dominating the upper portion of our preliminary ranking with four in the top six. If an NHL organization is looking for a potential franchise defender to build around, this could be a great year to finish inside the lottery.

One of the biggest draft stories of the season thus far has been the dominance of the ‘Michigan Three,’ otherwise known as Matthew Beniers, Owen Power, and Kent Johnson. Beniers and Power will be found at the top of our list, while Johnson is just outside of the Top 10. The Wolverines have an electric young roster that is making waves in the Big Ten this season and they will be ones to watch in the Frozen Four tournament down the line.

Another of the draft’s biggest stories this year is the lack of a “true” or “consensus” number one selection. Depending on which draft ranking you read, you may see a lot of different names mentioned in that top spot. In all honesty, any of the players listed in our top 10 could have been considered for that honour and that race for number one will be something to monitor as the season progresses. As of right now, Michigan center Matthew Beniers occupies that top spot for us because we believe that his skill set translates the best when projecting a potential impact player in the NHL. With his speed, skill, and competitiveness, he projects as a true, all situations, number one center and leader. That was on full display at the most recent World Junior Championships where Beniers was clearly the top draft eligible player at the event.

As you read through our rankings, you will also notice that several players do not have stats listed beside their name. Dylan Guenther, Mason McTavish, Francesco Pinelli, Ryder Korczak, and Sebastian Cossa have played sparingly this season on loans to other leagues, or simply not at all. Additionally, many players, such as Brandt Clarke, Carson Lambos, Cole Sillinger, Brennan Othmann, Logan Mailloux, and Daniil Chayka are playing in different regions currently as they await the start of the WHL and OHL seasons (if they even occur at all). Will these homes be permanent for the season or will a transfer occur?

Another noteworthy thing you will notice is the high rank of Swedish goaltender Jesper Wallstedt. Wallstedt has been terrific this season in the highest level of the Swedish men’s league and our scouting staff feels that he has a legitimate chance to be the best player from this draft class ten years from now. With size, athleticism, composure, and technique, he is the complete package and worthy of a high selection.

Without further ado, please enjoy our preliminary Top 32 for the 2021 NHL Entry Draft. Should you have any questions about the list, do not hesitate to reach out on twitter (@mckeenshockey) and we will do our best to answer them.