Hello my name is… Jani Nyman

Nyman has a heavy, accurate shot that he uses from the slot and from the wings. He’s a massive winger, able to use his body to collect pucks around the net or really get his weight behind a one-timer from the wing. He jumps on this loose puck and sends it right to the top corner.

He’s a one-time threat on the powerplay, able to do some real damage with the puck in his wheelhouse.

Nyman looks to have a bit of misdirection in his release as well: it’s apparent that the goaltender doesn’t expect a short-side shot here.

Nyman is a big guy that likes to get in fast on the puck, applying pressure and hoping to prey on slow-to-react defencemen. His 6’3” frame provides a physical threat that seems to get in defender’s heads, but Nyman isn’t a particularly physical player yet and prefers to do his damage with stick checks.

Two stick lifts here are enough to free up the puck, allowing Nyman to send a teammate in on goal for the score.

In the defensive zone, Nyman is aware and positionally sound. He denies passing lanes and erases what would otherwise be excellent opportunities for the opposing team. He drops down into the slot to intercept this centering pass.

Nyman gets out to the point and forces a turnover with his long reach.

It isn’t a central skill in his toolkit, but Nyman can make some nice passes around the net to complement his scoring touch and off-puck play. Nyman’s vision and awareness fill out his offensive game nicely, giving him another offensive element to defer to when he doesn’t have shooting or driving lanes. Nyman forces a turnover on the forecheck, then picks his head up and feeds the slot for an assist.

He doesn’t just bury his head and go to the net here; he’s aware of the help and happy to use it.

He’s got a pretty good shot if he wants it, but recognizes the golden cross-ice lane and uses it.

Nyman has played in three different leagues this year, establishing himself as too good for junior but not being able to find a regular role on Ilves professional roster. The solution was a loan to KOOVEE of the Mestis, Finland’s second tier of professional competition. Nyman has absolutely excelled, producing above a point per game clip through 18 games thus far. Roby Järventie, the 33rd overall pick in 2020, took the exact same path: a loan from Ilves to KOOVEE, where he managed 38 points in 36 games. Järventie had a strong season the following year as a Liiga rookie, and is now playing for Belleville in the AHL. Expect a similar progression for Nyman, who will likely finish the year in the Mestis before jumping to the top division next season.

Hello my name is… Aleksanteri Kaskimaki 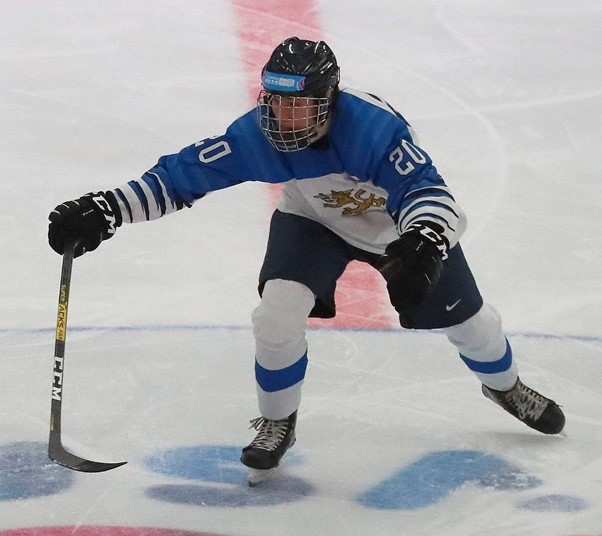 Aleksanteri Kaskimaki of HIFK U20. Photo by Martin Rulsch.

Kaskimaki is a major threat from the slot, using a powerful wrister to threaten off the rush. He beats the goalie clean on this rush shot.

Cocking the puck back leaves every defender flat-footed, allowing Kaskimaki to walk the puck in and snipe from the slot.

He finds the top corner here while drifting rightwards on one leg.

And sends the water bottle flying with this fluid catch-and-shoot release.

Kaskimaki winds around the edges of the offensive zone, then slices right through the slot to the net.

He’ll blend the puck skills with his shot to improve his looks: this toe drag freezes the defender and opens up a shooting lane for Kaskimaki.

This move at the line allows Kaskimaki to gain the zone, enabling him to rip the puck home for another rush goal.

Kaskimaki has a quick, compact stride that makes him a threat in transition and a difficult player to defend on the rush. A quick burst allows Kaskimaki to fly by the defender at the blueline.

The camera doesn’t give us a good look at this play: all we see is the defence scrambling as they realize Kaskimaki’s speed and then a great shot chance near the goal after the Finn has ripped his way down the wall.

Kaskimaki has operated well over a point per game at the junior level this season, using his combination of speed, hands, and shooting to terrorize off the rush. He has just two Liiga games under his belt so far. Kaskimaki’s rush-centred style might not be particularly well suited to fourth line Liiga minutes, so a full-time professional role might have to wait until next year. Still, he should get some more spot chances in the Liiga over the remainder of the year.