Hey everyone! This is Will Scouch, and I’m extremely excited to join the McKeen’s team to provide companion pieces to the Scouching Reports I put together over on YouTube. The videos will be available for 48 hours to McKeen's subscribers prior to their release on youtube.com. Part of the reason why I put the videos together is that they force me to really watch how a player plays and explore why a player’s production and data might over or undervalue them around draft time.

My approach to breaking down a player’s profile falls into five categories: Think, Move, Get, Pass and Shoot. Those five categories summarize all the various aspects of the game as it relates to an individual player to me. How players play and process the game naturally, how they get around the ice with their feet and hands, how they play when pucks are either loose or in the opponent’s possession, how they move the puck around the ice, and how they try to put the puck in the net. Within those categories, the player is given a number and a letter grade indicating the overall tier of talent that player showed in that skill, and the consistency in that tier that I viewed. All of these ratings are amalgamated into a final rating that tries to encompass a player’s value. This system allows for highly discrete analysis while still leaving reasonable evaluation to consider a top prospects strengths, weaknesses and future potential. Seven games are tracked, six against top-half teams, and the data can be found in the description of all of my Scouching Reports.

I track a number of metrics during these seven games to try to encapsulate how a player plays. These metrics are outlined and defined below: 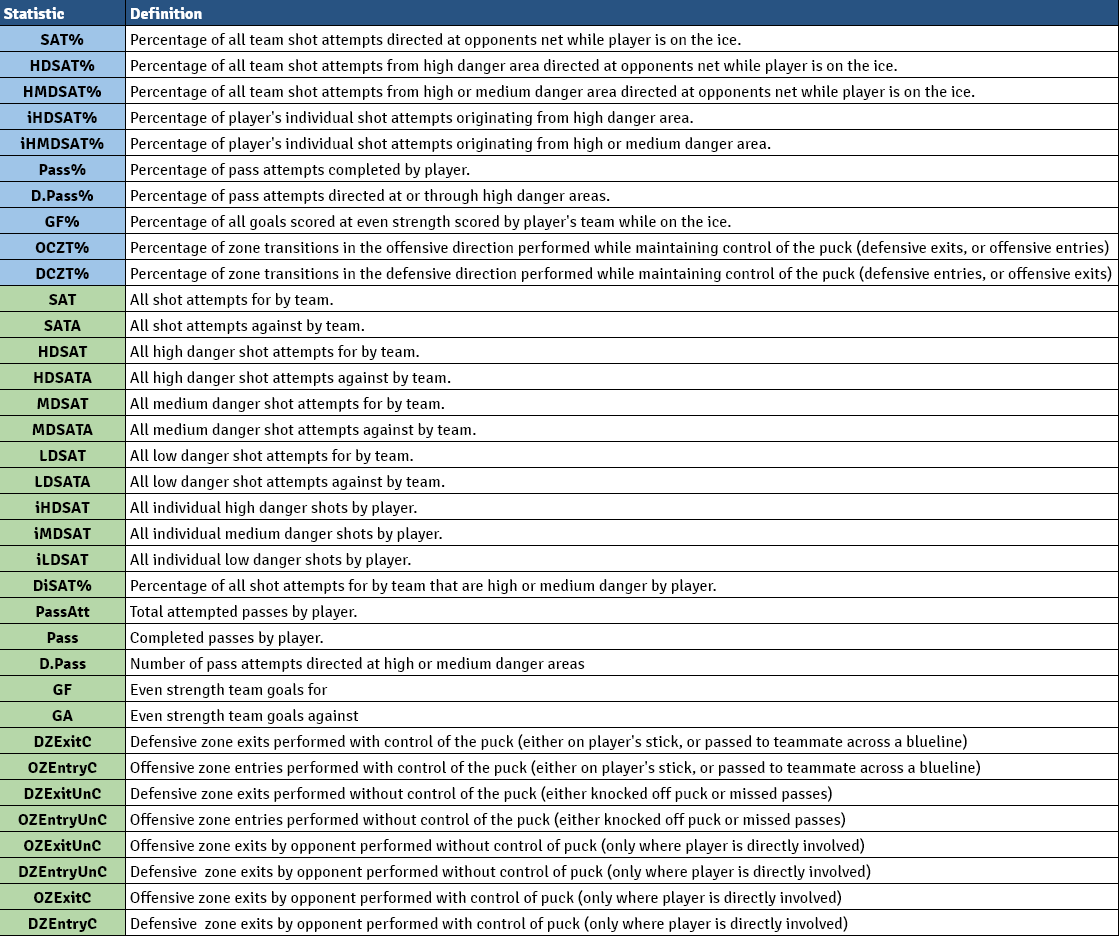 The goal is to use data and video to craft as accurate a profile of a player as you can. To me, an ideal player is one that moves pucks offensively with control, stops transitions coming towards them, drives shot attempt differentials in high and medium danger areas of the ice, completes passes at a high level while attempting to put pucks into dangerous areas of the ice. How they do it and if it’s “projectable” is where the video comes in. Do they play with speed or patience? Are they often primary puck carriers? How physical are they when shutting down offense? In my view, there are many ways to be a successful hockey player, but at the end of the day you have to get results. The data provides the results, and the video can identify the mechanisms that drive those results. It’s important to be clear about a player’s pros and cons with data and video to back it up, but it’s also important to remember that these are young players that are usually years away from stepping onto an NHL ice surface. Identifying weakness is just as imperative as identifying strength, and these reports can provide solid objective analysis of a player’s game and their ensuing results, be they positive or negative.