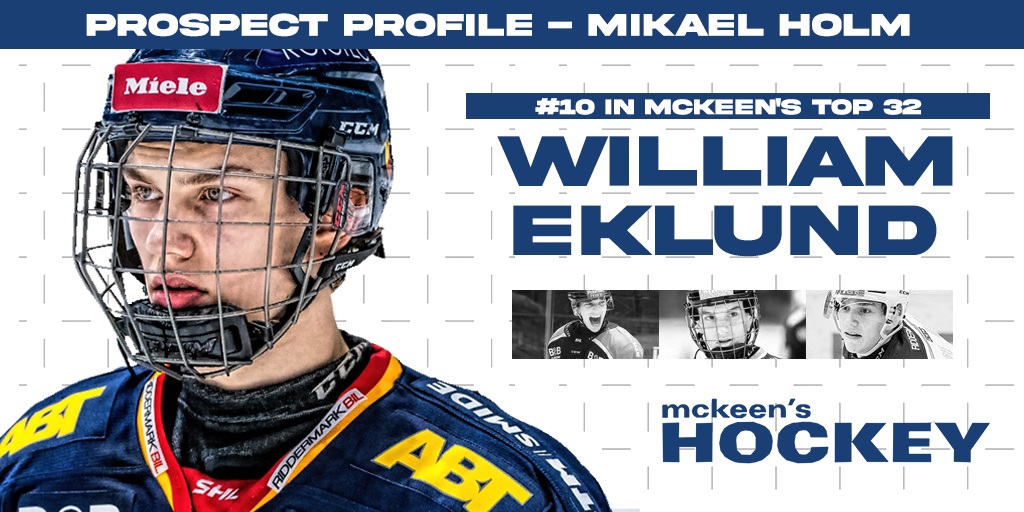 When you come from a family where your father is an icon and one of the most popular players over the last 20 years with the club where you now play, there are some big shoes to fill. William Eklund’s father Christian (also known as Fimpen, which makes William Lill-Fimpen) played for Djurgården for 13 seasons as a hard-working winger with some goalscoring tendencies. When William started rising up the ranks for Djurgården’s youth teams, there was some buzz among fans that they might have the second coming of “Fimpen”. William embraced that and in his first season in the SHL, playing bottom line minutes for 20 games, he showed that he can be a grinder just like his father. He also showed that there is more to him, he is not just a hard worker that can have a decent scoring season if he plays with the right players and has some luck with his shooting.

Eklund proved that immediately at the start of the 2020-21 season, where he was put on the top line with Jacob Josefson, a former first round pick of the New Jersey Devils and one of the best players in the SHL, and Alexander Holtz, a current first round pick of the New Jersey Devils and Eklund’s best friend. Eklund has tremendous edges in his skating which gives him the ability to navigate away from defenders while also creating space for himself. His turns are ridiculously quick and with those turns he can get away from tough spots along the boards where his slight stature might not be able to protect the puck against bigger players.

He is a great playmaker with a quick thought process and is finding plays that no one else on the ice sees. He is a good shooter and has the ability to pick out spots in the net and put the puck there on a consistent basis. He is a main play driver on his line when he is on the ice and that is a rare thing when it comes to 18 year old players in their draft year in the SHL.  At the NHL level, Eklund projects as a top line complementary winger that produces both goals and assists at a good rate. I see him as a Jake Guentzel-type of player but maybe not with the same goal scoring touch.

Skating – Eklund’s skating might just be his strongest asset. His mother was a figure skater and it shows in Eklund’s skating that he has taken advantage of that growing up. His edges are exceptional and it gives him the opportunity to turn fast (faster than his opponent) and those turns gives him the little extra space that he needs to create chances for himself or his teammates. He has a quick first few steps as well and utilizes that a lot in the offensive zone where he almost comes to a full stop at times but then takes a few quick steps and he is away from his opponents having created a bunch of space for himself. His top speed skating isn’t at the same level as his edges or his quickness but it is still very good and more than good enough to compete at the highest level. With some improvement in histop speed, he could become a force to be reckoned with. Grade: 60.

Shooting – Eklund has a great shot but it is great in a different way than that of teammate Alexander Holtz. Holtz can beat the goalie from anywhere with a wicked wrister or snapshot. Eklund’s shot is more dangerous in the way that he picks his spots and then he puts the puck there. When Eklund gets some space or a breakaway, he beats the goalie cleanly because he sees an opening and finds that opening. Eklund isn’t a high-volume shooter, he would rather set teammates up when he has control of the puck in the offensive zone against a set defense. However, if he can find space in the offensive zone despite facing a set defense, he will take that space and he will pick his spot to shoot at.

He utilizes his wrist shot more than anything else and rarely, if ever, uses a slapshot. He can also score from in tight, as he has shown when playing in front of, and around, the net on the power play for Djurgården. A few of his goals this season have come on the man advantage where he sees space in front of the net and attacks it with the puck on his stick, getting a quick snap shot of to beat the keeper. He gets good power to the shot but he isn’t a guy that you put in one place and feed him passes so he can bomb one-timers a la Ovechkin. Grade: 55.

Skills – The hands Eklund possesses are strong and nifty. He thrives a lot in tight spaces thanks to his exceptional edges but he uses his hands to get out of tough spots and also to make his opponents look like fools at times. His hands are fast and they move at all times, giving him the opportunity to either find quick passes or get away from his opponents. He is good at covering the puck with his hands, he utilizes his stick while he has the puck to move opponents’ sticks and covering the puck in a way that makes it extremely hard for his opponents to take the puck away from him. He uses his hands mostly in offensive transitions where he can glide through the opposition’s defense using his speed and hands. Grade: 60.

Smarts – I said earlier that Eklund’s strongest asset might be his skating, but his smarts are the reason I said “might”. Eklund is a very calm hockey player, who doesn’t get flustered by pressure because he can evade it with his skating as well as with his mind. He knows when to try a offensive zone entry on his own or when he should pass the puck or even when he needs to turn around and regroup for a new attempt. When he has the puck on his stick he sees open space and find players in that open space and if there is no players there he utilizes that space for himself. He sets up high danger passes on a consistent basis and he has the creativity and awareness to do stuff that no one sees coming.

Defensively, he is aware of what he needs to do and can read play at a decent level and he tries to stop play with his body or his stick and he is aware of what he does at least causes issues for the opponents. He wasn’t used a lot in defensive situations when Djurgården tried to defend a close lead or on the penalty kill so we haven’t seen what he is able to do there yet. With some work I am sure he can be a penalty killer later if the team that drafts him wants him to be one. There are definitely improvements to be made defensively for Eklund but he isn’t a liability and with some maturity and experience, he can be a positive on the defensive end instead of being neutral. Grade: 60.

Physicality – Here lies the weakest part of Eklund’s game. He can get pushed off the puck a little too easy sometimes and he needs to become stronger to really make an impact in the NHL. However, I would say that this is the part that is also slightly underrated about Eklund. I mentioned his father earlier and he definitely has given some advice to his son about how to use physicality in his play. William Eklund can throw some hits at times, he doesn’t shy away from battles in front of the net or along the boards, and he can push some players off the puck with his body. Eklund doesn’t have the size to become a wrecking ball in the NHL but he won’t be a pushover either. He will grow and he will become stronger and with that he can use his body to protect the puck better and win the puck back easier. He doesn’t have to play like a power forward because he is good in other areas of the game but he will never back down from a battle. Grade: 50.