Colorado’s slow rise to the top of the NHL has been impressive to watch. They’ve always played fast, especially since drafting Nathan MacKinnon, they’ve always had high-end talent, but it took a few years for things to come together. MacKinnon went from a very good player to an elite player, Mikko Rantanen became a perfect fit on his wing, their defense went from Erik Johnson & A Bunch of Guys to one anchored by Samuel Girard & Cale Makar. Thus, they’ve been one of the top teams in the Western Conference (if we’re still calling it that) for the past two years.

They’ve made a habit out of running up the score and the shot count against almost everyone this year, controlling over 60 percent of the Expected Goals at five-on-five and averaging over three goals per 60 minutes. Stats that are comparable to the likes of the 2009-10 Chicago Blackhawks and 2007-08 Detroit Red Wings. The one team that has given Colorado trouble this year is the Vegas Golden Knights, who own a 3-3 split of the season series and are similar to the Avs in a lot of ways. Not just statistically, but stylistically.

If you’ve watched any games of these two teams, you know that they’re both fast, run-and-gun teams that like attacking off the rush. Using some of the zone entry & passing data from the All Three Zones Project, we can quantify just how good both these teams are. Unsurprisingly, they are the top two teams in the league in creating shots off the rush and among the best in the league at creating scoring chances after carrying the puck in.

Basically, they’re getting through the neutral zone and making their possessions count. Even if they’re not scoring off the rush, the strength of both teams is just how long they keep opponents pinned into their own zone. They not only lead the league in rush shots, but shots off the forecheck or the cycle, which means that they’re versatile and spending a lot of time not having to defend. Again, the volume of shots here compared to the rest of the league is something to behold. 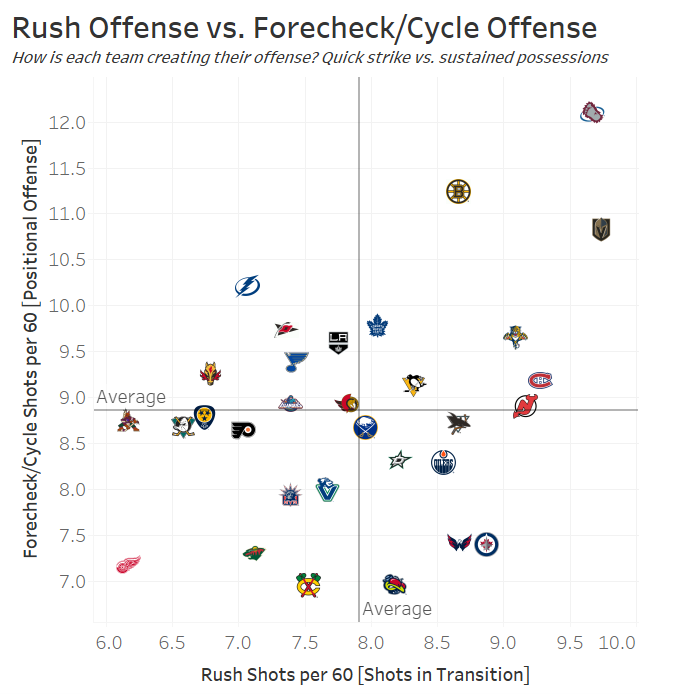 Data from All Three Zones Project

When the game is at even strength, they’re usually the ones with the puck or controlling the run of play. The intra-divisional play is obviously a factor here, but it’s still hard not to be impressed at how both of these teams have gone about their business this year.

What stands out for Colorado is who they’ve been able to do this while dealing with a barrage of injuries, especially on their blue line. It’s been a problem all season, but the biggest challenge was when Cale Makar was out of the lineup in early March and the team was dressing as many as four AHL regulars on defense. Colorado still continued to roll teams, going 7-2-1 without Makar while also dealing with season-long injuries to likes of Bowen Byram and Erik Johnson.

What’s interesting is that some of the replacements thrived in big minutes when they were called upon, the best example being Jacob MacDonald, a 28-year-old with only two games of NHL experience to his name before this year. Starting the year on the taxi squad, he found himself contributing in big minutes alongside Girard & Toews. While some of their younger players struggled to play higher in the lineup, MacDonald remained a fixture, positing very good on-ice results and earning a regular roster spot after Makar & others got healthy. Regardless of whether or not you think MacDonald is the one driving the bus, there is something to be said about the Avs making it easy to integrate defensemen into their lineup. Just ask Ryan Graves, another AHL vet who found a home in Denver.

In theory, it should be easy for a defender to play for a team like the Avalanche. The play is usually in front of you, and everything is going downhill fast, so there’s not a lot of times where you’re in a high stress situation, especially when you’re playing behind forwards like MacKinnon & Kadri who can carry the play.

This isn’t always how the game always works, though. You’re going to have to play some shifts in your own zone & it also takes certain skills to work in a system like Colorado, because your decisions have to be quick and your passes have to be on point, otherwise you might be looking at a turnover the puck coming back at you at the same rate of speed. Yes, they control the play most games, but you have to be looking for an open play instead of banking the puck off the boards or the glass as your first option if you’re going to fit in with Colorado. This is no problem for a player like Makar or Girard. Youngsters like Byram & Timmins are still finding their way, so what has MacDonald done that made him fit in?

Jack Han illustrated some of the strengths of the Avs system here with the main component being how their D (or the first player to retrieve the puck in the defensive zone) is instructed to beat the first forechecker to create an odd-man situation up the ice. It can be by skating, a good stretch pass or a well-designed breakout with support. MacDonald might not have much NHL experience, but he has a solid offensive track record in the AHL and has adapted to the Avs system seamlessly.

You wouldn’t expect MacDonald to be among the league leaders in shots produced off the rush, but this clip shows a good example of how he’s gotten acclimated to how the Avs play. Notice how tight him & Toews are on the Kings forwards as they try to work the puck behind the goal line. They create a 2v1 for Colorado, which leads to a loose puck & a breakout for MacDonald. Meanwhile, the right winger (Burakovsky) is reading where the puck is the entire time & is already in a great position to receive the pass to exit the zone. Notice how MacDonald immediately starts skating out of the zone after making the pass to Burakovsky, this gives him a passing option after entering the zone while Brandon Saad drives the net. The Kings have to backup because MacDonald had a step on the backchecking Kings players & Colorado gets a good scoring chance out of it. 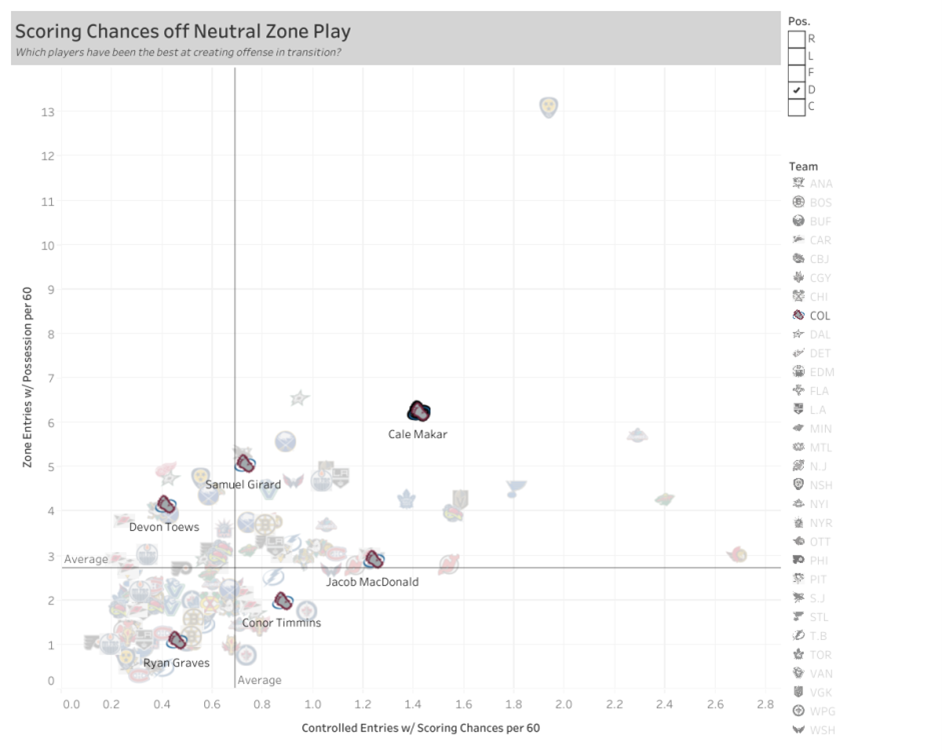 If you’ve watched any Colorado game, you’ll notice that all of their defensemen are active & involved, but they don’t always lead the rush like you see Roman Josi or Miro Heiskanen do. Instead, they act more as a trailer while their forwards do most of the legwork up the ice. You could argue it’s better to have your D involved like this because the whole point of having them involved is to create a numerical advantage at the line or in the offensive zone. If the defender is leading the rush, usually a forward has to stay back or stationary at the line to cover. If they’re activating as a trailer like MacDonald in the clip above, it’s usually a reaction to three forwards getting caught deep or a situation where the player knows there’s an opening they can exploit. When broadcasters say a defenseman has the “green light,” this is what they mean.

This also applies to cycling the puck & attacking from high to low in the offensive zone. Every team wants their team to be aggressive & having their defense pinch to keep pucks alive or disrupt exits is nothing ground-breaking. How Colorado’s defense works in rotation with their forwards, however, is another story. What separates the Avs (and Vegas) from some other teams that like to attack off the rush is that they have a forecheck/cycle component to their game that is tough to defend. They like to cycle the puck high, have their forwards rotate with their defensemen often & try to create space down low or in the slot through deception or defenders getting lost with all the player movement going on up high. Sometimes they’ll have a defenseman loop out of the zone for a quick second, so there’s enough space for him to skate into a shot around a defender from the faceoff circle. It’s easier to play in the offensive zone, but it requires a lot of coordination, smarts & teamwork to execute it the right way. One could argue it’s tougher than breakouts or defending, because a misplay or a bad pass high in the zone is one way to giftwrap a breakaway for the other team.

Watch Girard (left) & Toews (right) read off what the forwards do. At first, it looks like Toews is trying a give & go play with the high forward, but Rantanen sends the puck into an open corner & Toews has to back off while MacKinnon retrieves the puck & goes up high. Look at all the space that opens up while MacKinnon carries the puck & makes the switch with Rantanen. Toews has to leave the zone for a split second & takes advantage of the open space created by the forwards to get a scoring chance. He gets a second chance because MacKinnon stays high & the Blues have to change personnel when they finally get possession of the puck. Colorado’s defense is known for dancing with the puck & doing spin-o-ramas to get away from attacking forwards and while those are fun to watch, the subtle, off-puck plays are just as effective. It’s also a reason why Toews is a 24-minute a night player in Colorado instead of just second pair/power play weapon that he was perceived as with the Islanders.

Sometimes the defense activating serves as a distraction.

The forward, Compher (37) and the defenseman, Timmins (22) are the ones to watch here. Nothing really special happens here except Timmins goes to retrieve a loose puck along the boards. Compher goes up high to cover for him & then immediately goes to the front of the net while all three Blues forwards are fixated on what’s going up on high. Compher ends up unmarked in front of the net & scores off the rebound of Timmins shot. The Blues might have gambled with trying to block the shot or kill the play at the point, but it’s always risky to do this against the Avs, even if it is their fourth line. Timmins is one of the few blue liners who has had a tougher learning curve compared to others, so it will be interesting to see how he improves in this system, especially with the team relatively healthy on defense now.

When your depth players are creating situations like this, it’s usually a good sign. Colorado checks most of the boxes for a contender, so their playoff fate is going to rest on their goaltending and how they respond to mistakes. Colorado can play this style better than any team in the league and it’s tough to defend if they’re on their game. It’s just that there are moments where things go haywire & even with Colorado’s improved defense, there’s going to be a few slip-ups because that’s just the nature of the beast. They learned that the hard way in last year’s playoff run with their Murphy’s Law type of run of injuries. The Avs already survived one injury spell, using almost every defenseman in their system, and came out stronger on the other side. Still not fully healthy, this defense corps has been battle tested more than almost any other team this year and the Avs have done a great job of fitting everyone in.