Today’s junior goaltenders focus a good portion of their technical training on the economy of movement.

Whether they are smaller goalies that need to control their raw athleticism, or they are bigger goalies that want to utilize their size more effectively, the economy of movement is a vital key to success at the higher levels. The economy of movement is also important because it helps goalies conserve energy, and not only over the course of a few periods, but over the course of an entire season.

But the economy of movement is not just a set of technical tools that allows a goalie to be in better position throughout a game; it’s also a specific mindset. This mindset is focused on moving as little as possible in order to always be set and square to shooters. If rebounds are allowed, that limited movement allows a goalie to make controlled follow-up saves, all while maximizing their net coverage. 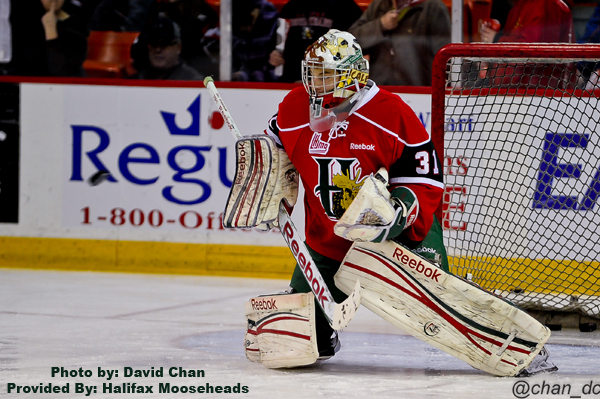 In the few instances I’ve evaluated Zach Fucale, I believe no phrase reflects his overall game more than the economy of movement.

Last year’s workload is a great example. As a 16-year-old, Fucale played in 80 games between the QMJHL regular season (58), the playoffs (17), and the U-17 World Hockey Championships (five). That’s unheard of for a prospect at his age, but it gave him a chance to learn and understand a concept that many goalies don’t grasp until their early 20’s.

In a game last Friday night against Gatineau, I got a real good look at Fucale, and even though he was rarely tested, I think he’s capable of being one of the top four or five goalies selected in the 2013 NHL Draft. He still has a lot to learn and a long way to go in his overall development, but at his age, I really appreciated his calm and efficient butterfly style.

Knowing that Halifax had a dominant first line and entered the game as the top team in the Canadian Hockey League, I was interested to see how Fucale would handle the mental game. Playing on a dominant team makes the physical workload easier to handle, but it can be tougher to stay focused when facing sporadic quality scoring chances.

Aside from a shorthanded tally on a quick one-timer that beat him over the glove just 14 seconds into the second period, Fucale was picture perfect. Even after giving up the shorthanded goal that tied the game at 1-1, his confident demeanor never changed. He stayed relaxed, he continued to manage the puck very well, and he made the timely saves until Halifax blew it open in the third period.

Beyond his overall economy of movement, Fucale did a great job of taking shots in the belly and not allowing second chances. He did lose sight of the puck a few times when it was directly behind his goal, but he stayed centered in the crease and he didn’t over-amplify his movements. He also made a few good saves through screens, establishing his positioning and staying square despite the traffic.

Fucale’s stick placement on low plays was also quite effective. It was consciously utilized to actively cut off cross-crease passes, and then flipped to the backhand when sliding to cover the glove-side post. Every move he made with the stick was made with a purpose.

Another positive aspect of Fucale’s game was his ability to make saves look easy. It certainly helped that many shots came from the perimeter, but even on a few odd man rushes in the second period, there was no panic in his execution. He didn’t lunge out with his hands to reach for pucks at the wrong time, and he did a great job of letting pucks come to him in a patient and balanced manner.

Fucale’s biggest saves came in the second period when he displayed great timing coming across laterally on a few 2-on-1 rushes. On these plays, he didn’t push early or over-slide his angles, and due to his sound positioning, shots would hit his pads and die, thus giving him the chance to quickly and effortlessly cover them up.

Despite the score or the situation or the lack of action, Fucale displayed the same composure and efficiency on the seven shots he faced in each period. He went on to stop 20 of 21 shots for his 14th win of the season on a relatively easy night for the Mooseheads.

Knowing that Fucale was the only 16-year-old starting goalie in the entire CHL last season, the experience he gained at such a young age really put his development on a fast track. To play in 80 games last season, with more than 25-percent of those coming in the playoffs or internationally, it’s safe to say he had a huge advantage over other top-level prospects his age.

It’s important to note that behind a dominant Halifax team, Fucale has faced more than 25 shots in just six of his first 17 games this season, but he’s also 3-0 when facing 30 or more shots. So while the workload may be low, the mental and technical lessons he’ll learn from Halifax goalie coach Eric Raymond will still constitute quality development.

Behind a solid showing in 30 minutes of action during the Subway Super Series, and with a strong start for the Mooseheads, maintaining that consistency will be the key as he continues to build upon his reputation of being a durable, mature, and economical goalie. By doing so, he should end up as one of the top goalies available in the 2012 NHL Draft.

If you would like to get to know Fucale a little better, here’s an interview I conducted with him over the summer for The Goalie Guild.