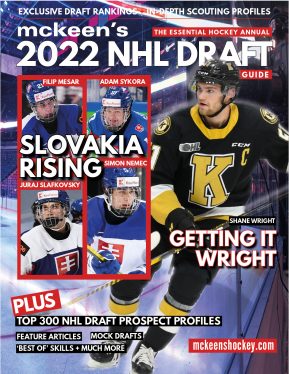 We are proud to release the  McKeen’s 2022 NHL Draft Guide. It was a tremendous relief and joy to scout a somewhat full season again. We feel that there is no doubt a lost or truncated 2020-21 season, due to the pandemic, affected many of the prospect’s development heading into 2021-22. While 2021 was a draft season unlike any we had seen, 2022 did present a unique challenge of its own we had not faced before. Very uneven playing schedules the season prior to their draft year made it difficult to set a baseline to start with, and a steeper hill for some to climb. As a result, we have witnessed as wide an opinion in public draft boards as we have seen in some years.

For that reason, we thank our entire scouting team for their dogged efforts this year in digging a little deeper, trying to understand the context for the player, and watching a lot of hockey. We appreciate the time and effort you put in. Enjoy a well-deserved offseason.

Brock Otten, in his first season as Director of Scouting, provided tremendous leadership and guidance to us all throughout the year. Brock did a great job of introducing some exciting young talent to the team and brought a focus on video that has made our reports stronger and more enjoyable. This seasons draft coverage, and bringing this guide to life, could not have happened without his efforts. We look forward to even better things next season.

We have plans to introduce some new magazines for subscriber next season and will have more news later this summer. As a tease, part of our plans include an update to the McKeen's NHL Yearbook at mid-season, and a full Prospects Report in April featuring drafted NHL prospects (which will be updated in our fall release). We have a few more things up our sleeve so stay tuned! To Learn More  or Subscribe Link Here:

$16.50 with a quarterly subscription - check out the benefits of membership incl. all digital magazines (Including the MCKEEN'S 2022-23 NHL YEARBOOK for a limited time!)

The magazine, available through an online subscription, is the starting point for our prospect coverage. You also have access to our deep database of player profiles, feature articles and scouting reports as a member at www.mckeenshockey.com. The profiles in this magazine will give you a good breakdown of the players, why they were ranked where they were, and is meant to be accessible for all hockey fans. If you want to go really deep on a player, the website has you covered with hundreds detailed scouting reports, deep dives, feature articles and so much more. You will also find some video and analytics work from Scouching (Will Scouch) to provide another perspective for your draft research and analysis.

Enjoy the magazine and all of our 2022 NHL Draft Coverage.