A graduate of the USNTDP program, Matthew Beniers’ late birthday meant he would have a chance to strut his stuff at the collegiate level for a season before being draft eligible. Most years, the top performers at the U17 level are moved up to play with the U18s early, and Beniers was clearly the top player of his age group at the time, even earning a spot on the American WU18 tournament team in 2019 – the same team that *only* won the bronze with a roster including the likes of Jack Hughes, Cole Caufield, Spencer Knight, and others. Not only did Beniers hang easily with those nine first round picks, but practically from day one he was playing the same forceful, energetic and skilled style that he plays now with the University of Michigan. Had he been eligible for the 2020 draft, Beniers would likely have been a top half of the first round pick, even without having played NCAA hockey, or at the WJC.

Truthfully, in most other years, we would be looking at Beniers as a definite top ten, likely top five draft candidate. This year, in a class lacking generational talents (we can argue what impact the COVID pandemic had on that some other time), he is in the discussion for the top pick. Beniers grades out well across the board, but rarely plays in a flashy style that brings you out of your seat. He has skill that can easily play in a top six and likely in a top line role as well, albeit less likely in a role wherein he has to carry the offensive load singlehandedly. He combines skill, energy and power to force countless errors from his opponents and is always ready to capitalize on those errors, making clear that his disruptiveness is intentional and planned out.

Beniers’ game could find a role in the NHL next year, but he would be more likely to reach his offensive ceiling if he was given one more full season in the NCAA, one more run at the WJC, to stretch out his skillset and simply dominate for a time. Even if he may never be a generational, franchise defining player, he could play a Jonathan Toews/Jack Eichel type of first line center role throughout his prime. 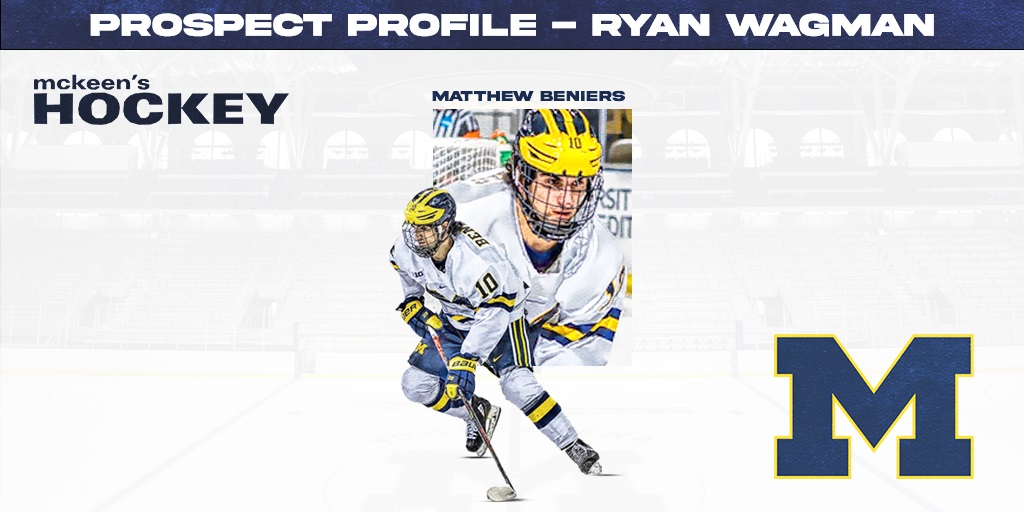 Although his skating is not on par with the likes of McDavid, or MacKinnon, Beniers is a very good skater. He hustles, which could be hurting him in the style-point component of this grade, but he gets there. He wins most puck races, and his plus edges allow him to dance with the puck. If there was a sequence to best illustrate his mobility, it was a solo rush in the World Juniors against the Czech squad. Beniers skated past all five Czech defenders, and around the net before dishing off to the trailing forward for a scoring chance. His wheels, combined with his effort and size makes him a beast on the forecheck, where he forces error after error from the opposition. I also want to take this space to point out his great balance and strength on his skates. An opponent could have Beniers all lined up for a big hit, only to bounce off him instead. For all of his power traits, he can also be very slippery, especially with the puck. Grade: 60

Shot – While Beniers has always been one to look for the pass first, he can certainly shoot it, too. He has a knack for creating an extra few inches of room for himself in a high danger area to get all he has on the puck. His one-timer is also quite powerful. Most of his shots come from the mid- to low-slot areas, increasing his chances of generating a legit scoring chance. His wrist shot is strong off the rush. A good number of his shots are from below the circles, but a wide angle, where he seems to be trying to generate a rebound to the slot more than hoping to beat the goaltender directly. The wrist shot, with its quick release, which allows him to squeeze pucks through tight slots, is his most frequent tool, but he will wind up for a slapper here and there as well. All told, Beniers’ shot is fine, but he will score more often from being ready in dangerous places than from wielding fire in his stick. Grade: 55

Skills – This is another area wherein which Beniers doesn’t bring flash, but brings absolute control. We can see this whether he is attempting a wraparound play, or maintaining possession in tight quarters. He can be elusive and slippery with the puck. He is great at skating the puck away from pressure in his own zone and will gain plaudits for his work entering the offensive zone with possession as well. He moves the puck around masterfully to force defenders to back off, giving him added space. Alternately, he can carry a defender on his back as he pushes ahead in the cycle. Although not as frequent, he can show off some slick moves as well, to unbalance opponents. Beyond puck play, Beniers is great at dishing it off. He is in control behind the opposing net, spotting linemates with passes to create scoring chances. As mentioned previously, he is a gifted playmaker and that stems from his vision and passing skills. Topping this all off, Beniers does everything at pace. Grade: 65

Smarts –  One of the best things about watching Beniers play is that he always seems to be right in the thick of the action – especially the good action, even if his name doesn’t get on the box score as much as some others. One of the younger players at this year’s WJC, he worked his way into a top six role by the end of the tournament, also playing a key role on the PK from the get go. He is the type who can push the play to the boards and pin it there for a few extra seconds to help ensure a line switch can be made safely. Another demonstration of Beniers’ hockey IQ is in his calmness with the puck. He is often used to try to enter the offensive zone with possession, but if he doesn’t like how the defense is spread out, or the timing of his support from linemates, he will circle back before the entry and try again. In addition to the aforementioned strong forechecking, where he puts tremendous pressure on the opposition, hampering their breakout attempts, his off-puck play in the neutral and defensive zones is incredibly mature. He has a knack for stripping the puck from opponents. He is tenacious, gaps tight and tries to force a mistake, succeeding more than most. While the pros will be less mistake prone than WJC or collegiate opponents, the energy with which he forces those mistakes will play at the higher levels. Beniers always seem to do the right thing =, given the situation at hand. Grade: 65

Physicality –A strong 6-1”, once he finishes filling out his frame, Beniers will have near ideal power forward size for the modern game. He is not a power guy in the sense that he is looking to hit others, but that he invites contacts and regularly powers through it. He plays with phenomenal energy, regularly sacrificing his body to give his team even a small advantage. His strong, wiry frame has thus far allowed him to play this style without undue risk of injury, and that additional physical maturity should allow him to continue along this path after he turns pro. Even without hurting opponents, he is a force to be reckoned with. Grade: 60