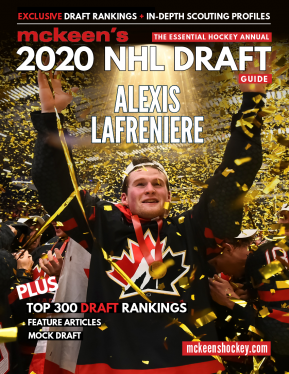 As it sit at my laptop to write this introduction to the Final 2020 McKeens Hockey Draft Rankings, I cannot but think on the strange circumstances that played out in the last few months that has forced us all – McKeens analysts, competing scouting services and of course NHL teams, to make decisions based off a condensed data set.

Every other year, we in the “draft community” are treated to a season culminating in playoff races, title chases, Cup runs and the cherry-on-top that is the World Under 18 tournament. On a personal level, the last event of that list was set to take place only a few hours from my home, meaning I could cross one more highlight event off my bucket list. In any case, along came COVID-19 and put the kibosh on all of it. On March 6th, I attended my last game of the year, watching the USNTDP lose a surprising game in Madison against the Capitols. Carson Bantle of Madison, who we ranked 75th on our final list had a five-assist night, three of which were primary helpers. Ryan Kirwan (#194) had a goal and two assists. 13 total players in our top 217 played that night.

I had games on my agenda booked for the remainder of the months, after which I would re-evaluate based on playoff matchups. We all know what happened. The last USHL game of the year (my home territory) took place on March 11. All CHL leagues also placed a complete halt on games after the 11th. What was originally a pause very quickly becoming a cancellation.

It should go without saying that the loss of conclusions of these (and many other) seasons pales in comparison to the staggering loss of lives, and loss of livelihoods, experienced across the world. But it should be said, even if only to remind ourselves, and one another, that no matter how inconvenient the sacrifices we have and will continue to make are, for many of us it has been much worse.

Hockey remains our respite, and for the bulk of those listed below, and many others besides, it remains a beacon. A hope for brighter days and the reward for years – entire childhoods – of hard work. A reminder of the sacrifices made that most of us could not imagine having made in our own lives.

At some point after the world of hockey was put on hold and/or cancelled, we at McKeens realized we would have to proceed with what we have. As much as we would have relished the premium events that mark the end of our collective scouting seasons, we had already spent close to six months watching and tracking the players who would make up the 2020 draft class. There were no more looks to be had. We would not be faced with the chimera of a clutch performance in any one postseason matchup or WU18 game that could coerce us to change a ranking that is based on a slow buildup of development from the first preseason game of 2019-20 to the seasons’ untimely end. On the other hand, it didn’t help that the NHL could not (and still hasn’t) set a date for the draft, for myriad reasons that won’t be recounted here.

With those realizations came the reminder that our system for grading players is not reliant on cross-scouting, however much cross-scouting can aid in ensuring that our individual rankings are in sync with one another. Further, as much as it hurt that there would not be a draft to attend for some of us, it did not really matter when the draft would occur, as long as it happened before the 2020-21 season gets underway, assuming that we are so lucky. Because until that happens, nothing will occur, short of freak non-hockey-related injury/illness befalling a player that damages their hopes of an athletic career, that could change our present opinion of them.

Whether the draft was going to take place on the weekend of June 5-7, or later in June, or July, or August or September, we might as well get things ready. And so, we got to work.

The list below is the summary of that work, but not its totality, and not even its plurality.

So far, we have written 172 detailed scouting reports of most of the top eligible players. That includes 94 of the top 100. We will complete the full set of the top 100 in the coming weeks, and add in a few more stragglers besides, as our mission is to provide you, our faithful and intelligent reader, with the most in-depth draft coverage available outside of an NHL boardroom.

As a reminder, the list gets its start through our regional analysts watching countless games all season and looking to judge the players on their component parts. For skaters, that means skating, shot, puck skills hockey smarts, and physicality. For goalies, that includes athleticism/speed/quickness, compete/temperament, vision/play reading, technique/style, rebound control, and puck handling. Each skill is then projected and graded. The projection is imaging how what we see now will look like through the prime of the player’s career. The grade is a five-point scale ranging from 20 (beer league bum) to 80 (GOAT). A 50 score is approximately NHL replacement level, someone who could play for a stretch without embarrassing themselves or significantly harming their team.

Depending on the player’s position, the component 20-80 grades are put through one of our formulae to get an Overall Future Projection (OFP), the sum of the parts. That OFP gives us an idea of the role we can expect of the player if he develops to his reasonably optimistic outcome. For blueliners, an OFP between 50-52 is roughly third pairing upside. 52-55 is second pairing. 55-57 is first pairing. 57 and up is a potential #1 stud. For forwards the scale is similar. 50-52 for fourth line. 52-54 for third line. 54-56 is second line. Higher than 56 is first line with 58 and up being an All Star. For goalies, we can truncate the grades, such that 50-55 could be a backup and higher than 55 could start. The higher a player is within a given range is the more certain we are that he can reach that range. Anyone with a 60 OFP or higher is looked at as a player who will be invited to the postseason awards ceremony regularly.

When we had compiled all of the grades from all of our regional analysts, we had 575 total names. The grades ranged from 43.5 (sorry, Viljami Nieminen) to 65 (Alexis Lafreniere). Of course, we did not take the OFPs and sort from highest to lowest and walk away. Sorting is a first editorial step, but others are made before we get to our final list. There can be dissenting opinions on players. There are many cases of players whose grades are based on play at lower levels (ie. High schoolers) or Europeans playing against men, where we take extra looks if possible and look at additional contextual aspects that might sway us one way or another. Also, the OFP is not a hard and fast rule. The gap between Lafreniere at 65 and runner-up Tim Stutzle at 61 is significant. The gap between one player at 52.25 and another at 52 and a third at 52.5 is very minute. Sometimes a regional analyst will feel more strongly about the lower ranked player in those cases as the grades are not accounting for some uncovered intangible. So we continue to refine the list until we get to a place where if we, in our infinite wisdom, were tasked with making every pick for every team, we would be satisfied in our ability to do everyone justice.

I don’t expect you to agree with every player ranked here. I expect you to find someone too high and someone too low. Someone who you think shouldn’t be drafted at all and someone missing from the list who you would love if your team selected in the third round. For that last group, our final Draft Guide, coming out very soon, will also include a list of 100 players who we considered for our Big Board, but who, for one reason or another, we could not make space for. The difference in quality between that group of 100 and the 100 directly above them is not very big in our eyes, but we have to pick someone. Before you pore over the list, please allow me to take a moment to acknowledge and thank the McKeens scouting team for their hard work this year, watching all of the games – so that you don’t have to. Not counting occasional forays into cross-scouting, we have, in alphabetical order:

Arlo Schulz – WHL, Western Conference (actually not on twitter. Good for him. Really)

If you don’t agree, hit us up on twitter and state your case.