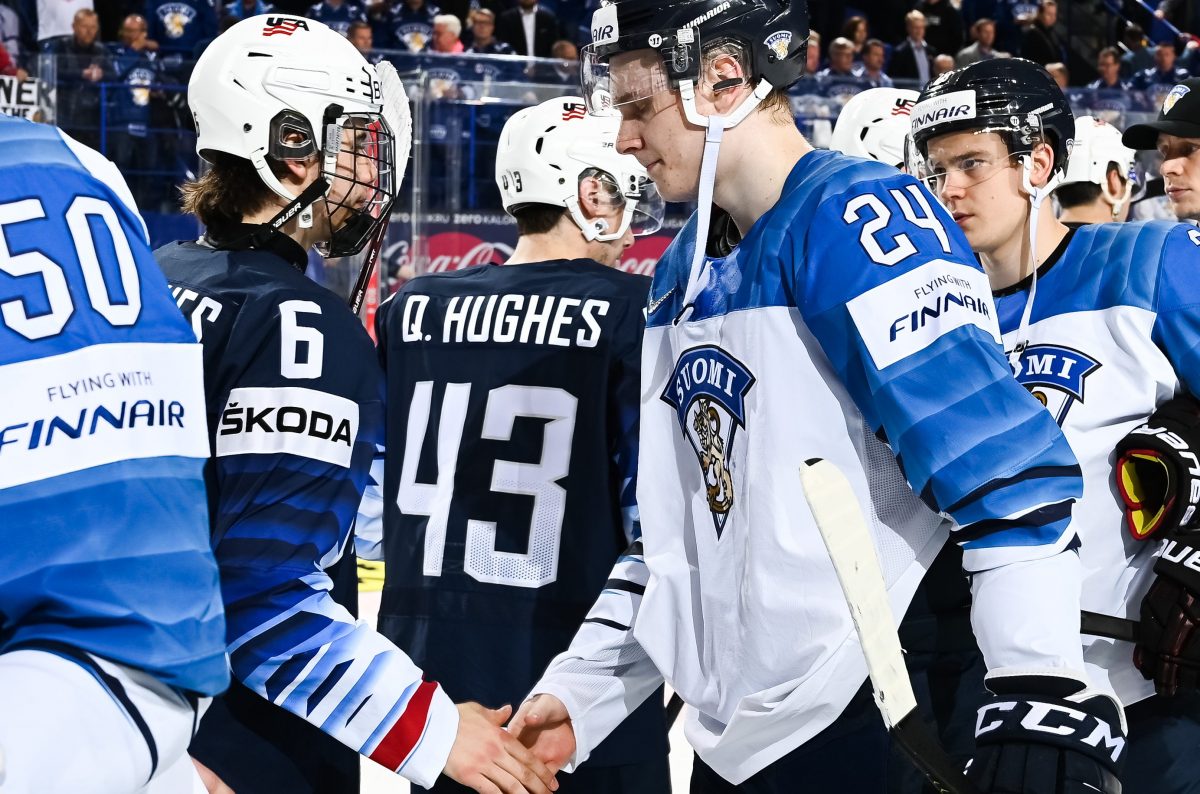 KOSICE, SLOVAKIA - MAY 13: USA's Jack Hughes #6 and Finland's Kaapo Kakko #24 shake hands following a 3-2 overtime win for team USA during preliminary round action of the 2019 IIHF Ice Hockey World Championship at Steel Arena on May 13, 2019 in Kosice, Slovakia. (Photo by Matt Zambonin/HHOF-IIHF Images)

That is the decision facing the New Jersey Devils who won the draft lottery for the second time in the past three seasons and hold the top pick in the 2019 NHL Entry Draft.

Hughes (5-foot-10, 170 pounds) led the USA Hockey National Team Development Program under-18 team in scoring while setting the NTDP career record for assists (154) and points (228) in two seasons (110 games) with the program.

He earned the highest Overall Future Projection (OFP) score of 64.50, as per the 20/80 grading system developed by McKeen's Director of Scouting Ryan Wagman.

The Turku, Finland native will go to the New York Rangers with the second pick, their highest draft position since taking Brad Park in 1966 before expansion (1967-68).

Kakko led Finland with six goals while winning gold at the 2019 World Championships at just 18 years, 102 days old to become the youngest player in IIHF history to win gold at the Under-18, Under-20, and WM (World Men) levels, supplanting Connor McDavid of Canada (19 years, 130 days) from the record books.

The Chicago Blackhawks have the number three pick with the top defenseman Bowen Byram of the Vancouver Giants next on the McKeen's OFP scale (63.40).

Seven players in total received OFP scores of at least 60.00 this season, up from five in 2018 - and just two in 2017 when the Devils selected Nino Hischier first overall. 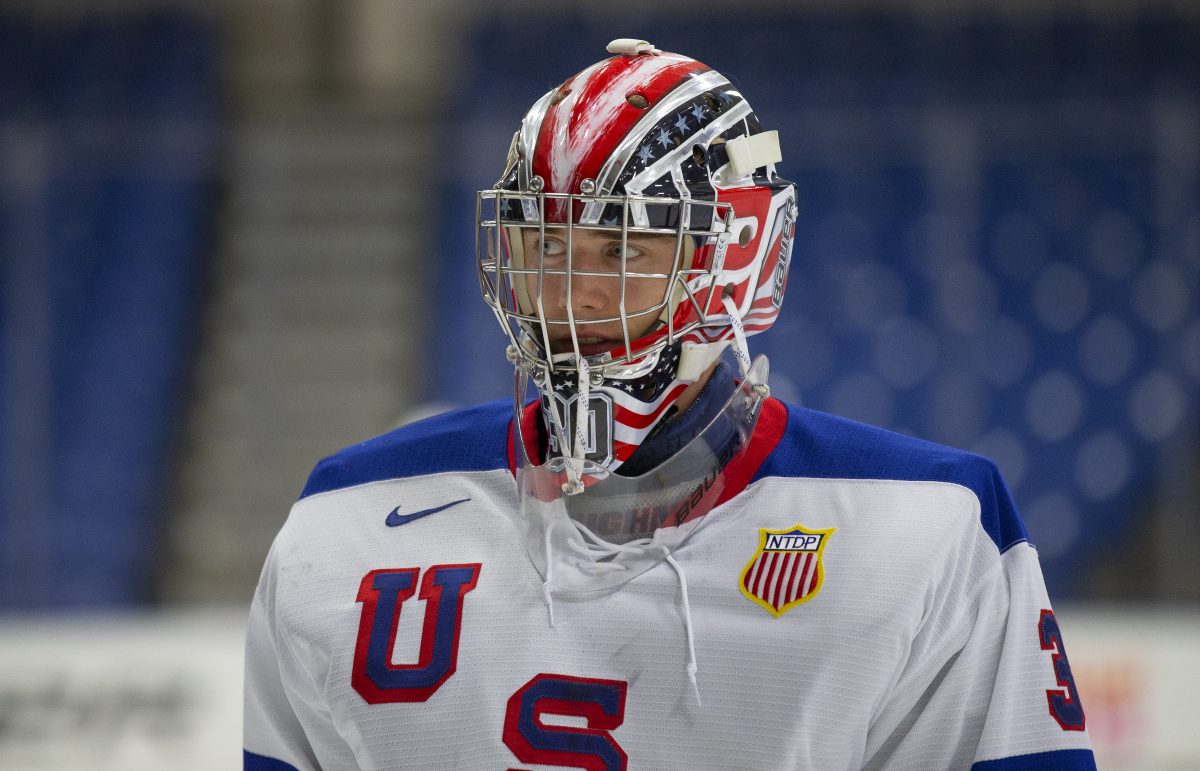 Spencer Knight of the NTDP is the top-rated goaltender available (55.75 OFP) at No. 32 in the McKeen's rankings.

Knight will likely go in the opening round of what will be a record haul for the U.S. National Team Development Program as upwards of eight players could be taken in the top 31 selections.

As for past records, the Brandon Wheat Kings (WHL) had four players taken in the opening round of the 1979 NHL Draft - as did the Toronto Marlboros (OHA) in 1972 and the Montreal Junior Canadiens (OHA) in 1969.

Along with Hughes (1st), Zegras (6th), and Turcotte (7th), wingers Matthew Boldy and Cole Caufield are ranked at No. 12 and 13 on the McKeen's list, with defenseman Cam York at No. 17 and center John Beecher at 30th.

Caufield (5-foot-7, 165 pounds) scored 14 goals at the U18 World Junior Championship, tying Alex Ovechkin's single-tournament goals record. However, the United States lost in a shootout to Russia in the semi-finals.

In total, 16 players from the NTDP are ranked among the top 100. 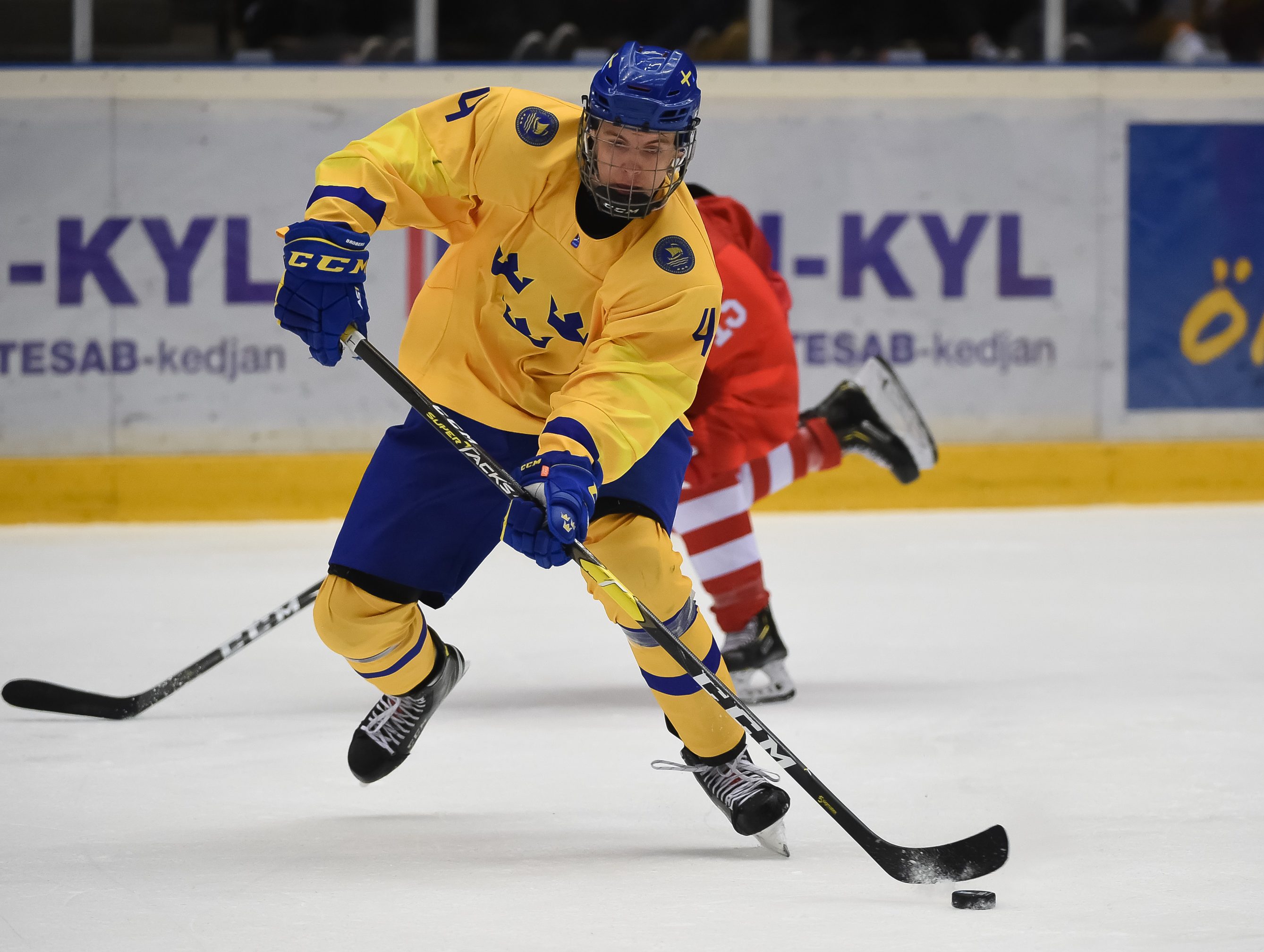 ORNSKOLDSVIK, SWEDEN - APRIL 23: Swedens Philip Broberg #4 makes a pass during preliminary round action against Russia at the 2019 IIHF Ice Hockey U18 World Championship at Fjallraven Center on April 23, 2019 in Ornskoldsvik, Sweden. (Photo by Steve Kingsman/HHOF-IIHF Images)

Sweden won a first-ever gold medal at the U18 World Juniors.

Four blueliners on that Swedish team are first-round candidates led by Philip Broberg of AIK, named 'Top Defenceman' at the U18 tournament, and Victor Soderstrom of Brynas, ranked No. 9 and 10 respectively on McKeen's.

U18 captain Tobias Bjornfot of Djurgardens is ranked 19th and Albert Johansson of Farjestads is 26th.

The 6-foot-3, 185-pound, right-shot blueliner displayed impressive skills and maturity for his age while appearing at the 2019 World Championships (5-2-0-2).

He will become the highest-selected German-born player at the NHL Draft since the Edmonton Oilers took Leon Draisaitl third overall in 2014.

Here are our final 2019 NHL Draft Rankings. They are a culmination of a season’s worth of prospect analysis and coverage on mckeenshockey.com and the tremendous work put in rinks and looking at screens and numbers from our committed team. Enjoy!

A subscription to mckeenshockey.com provides the profile for each player from our McKeen's 2019 NHL Draft Guide but access to our online library of player profiles. We have full scouting reports on over 150 2019 draft eligible prospects. You can learn more HERE