The Blainville-Boisbriand Armada are back for more in the 2018 playoffs.

The Armada won the league by 11 points and were the only team to hit the century mark, with a 107-point season and an impressive 25-3-2-3 record in the 2018 calendar year. Fresh off a President’s Cup finals run last season, the Armada are the team to beat.

Two teams finished the 2017-18 campaign on point streaks of 10-games or more, and those two teams are set up for big runs for the President’s Cup. The Victoriaville Tigres closed out the season with an 11-game winning streak, and they have three scorers in the top-10: Columbus’s Vitalii Abramov, Anaheim’s Maxime Comtois and the undrafted Ivan Kosorenkov. That trio has been the league’s most productive top line since Abramov joined the team from the Gatineau Olympiques in November.

The Acadie-Bathurst Titan have points in their last 10 games, and they added several pieces during the trading period in every role, including forwards Mitch Balmas and Sam Asselin, top-scoring defender Olivier Galipeau and St. Louis prospect goaltender Evan Fitzpatrick. Their recent streak won them the Maritime Division over the dangerous-but-young Halifax Mooseheads.

The races for playoff spots were more subdued than in past years, as the Saint John Sea Dogs and the Shawinigan Cataractes both missed the playoffs by six points under the Val-d’Or Foreurs, and the next team, in 15th, the Chicoutimi Saguenéens, bested the Foreurs by 14.

The Maritimes Division was Halifax’s to lose, and the aforementioned veteran Acadie-Bathurst squad overcame the Mooseheads in the final games. The Armada and the Rimouski Oceanic were leading the West and East Divisions at Christmas and cruised to the titles.

The QMJHL’s President’s Cup playoffs start Thursday, March 22, as the Foreurs take on the Armada in Boisbriand. All other series start on Friday, March 23. The league’s champion will go to Regina for the 100th Memorial Cup tournament at the Brandt Centre in May. 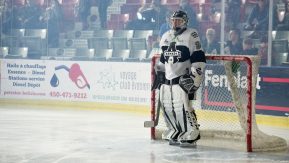 The Armada are just too good in all facets of the game for the Foreurs to handle. Val-d’Or may have had a better chance if they had not sent overage netminder Etienne Montpetit to Victoriaville at mid-season. Mathieu Marquis, who did not initially make the team and took the starting role in January, will face the brunt of the Armada shooters, with rookie Jonathan Lemieux on deck. Marquis has not won a game since February 16, and Lemieux has not won a game in longer than that.

The Armada boast plenty of offence beyond Barré-Boulet at 116 points, Alain at 87 and Batherson at 77. Forward Joël Teasdale notched a point-per-game with 65 points, and blueliner Pascal Corbeil had 51 points from the back-end.

The Armada are a puck-possession team, and there is a good chance that the Foreurs will spend full minutes without the puck during this short series. Since the Q has gone to a 1-vs-16 format, no 16 seed has ever knocked off a top seed. That continues in 2018. Armada in 4.

The Titan may be the league’s deepest team. They have the top-two defence scorers in Galipeau and Noah Dobson, along with Adam Holwell in the top-10 among blueliners. Anaheim’s Antoine Morand leads a formidable offence that is gritty, in-your-face and aggressive. They are 9-2-1-0 against teams from the East Division this season, and goalie Fitzpatrick is 17-4 since joining the team in January.

The Sags will need the Kevin Klima coming out party to continue for them to have any chance. After a slow start, Klima, the son of former NHLer Petr, had 75 points after November 1, and his 86 points were best on the team by 37 over teammate Vladislav Kotkov.

The Titan need a big run for the Bathurst market to have long-term sustainability. The market on the north shore of New Brunswick is struggling, and a pair of sellouts at the end of the year are just what the doctor ordered. A long run to reinvigorate the market will help, too. Titan in 5.

The Wildcats were leading the Maritime Division in mid-November until they fell back to Earth and stumbled their way through the rest of the season.

The Oceanic benefitted from their two hotshot rookies in leading scorer Alexis Lafrenière and goaltender Colten Ellis to secure the East Division title. Neither of them are NHL draft eligible this season; Ellis in 2019 and Lafrenière in 2020. Ellis, with five shutouts, was a major reason the Oceanic were the league’s stingiest squad this season.

The series will be most intriguing for a playoff matchup between picks one and three in last June’s QMJHL Entry Draft. Lafrenière has performed as advertised as the next prodigy out of the province of Quebec, and Moncton’s Jakob Pelletier has been a consistent threat for the Wildcats on all ends of the ice with his strong work ethic and high skill level.

Rimouski and Moncton have met five times previously in the QMJHL playoffs, and the Oceanic have won four of the five meetings. Make it five. Oceanic in 5.

After the Mooseheads clinched a playoff spot on February 8, they went 9-6-1-0, including some listless efforts against foes they should have handled. That stretch is where the Titan overtook them and grabbed the Maritime crown.

However, the Mooseheads have young talent to burn, including projected first rounders Filip Zadina, Jared McIsaac and Benoît-Olivier Groulx.

The Drakkar have an underrated group of forwards, including San Jose’s Ivan Chekhovich and Jordan Martel. Goaltender Francis Leclerc was picked on up waivers from the Armada, and has taken the bulk of the starts for Baie-Comeau in the second half.

Both the Mooseheads and the Drakkar are built with much of the 2016 Q picks in mind, where the Moose took Groulx and McIsaac first and second overall, and the Drakkar had four picks in the opening round and all four – Gabriel Fortier, Xavier Bouchard, Shawn Element and Edouard St-Laurent – have had impacts on the team this season.

The Mooseheads may have a rude awakening later, but they wake up for this series. Mooseheads in 6.

The Voltigeurs made only two impactful trades this season, acquiring forwards Connor Bramwell and Joe Veleno, but both moves have paid dividends immediately for the league’s best scoring team.

Bramwell was a point-per-game since being acquired in late November, and Veleno went on a tear after joining the Volts in December. Veleno has 48 points since moving to Drummondville, including a 13-game point-streak.

The pressures of having to be the man in Saint John clearly bothered Veleno at the start of the year, as he struggled handling his shift in role from second-line offensive bit piece to first line two-way center, captain and all-around saviour for a paper-thin Sea Dogs team. He has grabbed back his confidence and is every bit the player scouts expected him to be as the only exceptional status player in Q history.

Cape Breton is a tough team to play against, as they play an aggressive style and forecheck hard. Drummondville, coached by Team Canada gold medal winner Dominique Ducharme, will be ready. Voltigeurs in 5. 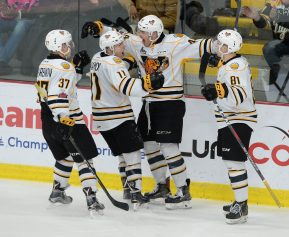 Since acquiring Abramov from Gatineau on November 17, Victoriaville is 32-10-3-2. Those are title contender numbers from a team that struggled out of the gate, and Abramov’s 78 points in 40 games since the trade is a major reason why.

The first line of Comtois-Abramov-Kosorenkov combined for 245 points on the year, and much of it together. They made their shifts look like the Globetrotters at times with their passing and stickhandling through the opposition. Gatineau is a better defensive team than offensive, but that will not matter. Etienne Montpetit in the Tigres goal will be more than enough to withstand any pressure Gatineau can muster.

Abramov dazzled Gatineau fans for two seasons before wanting a trade to a contender, and now he shows his top form at the Robert-Guertin in an enemy uniform. Tigres in 4.

The Huskies have the league’s best netminder in Samuel Harvey. The overager led the league in both goals-against-average (2.10), and save percentage (.930). In 46 appearances, he only gave up 95 goals and won 30 games.

The Huskies know a thing or two about strong goaltending performances, as Chase Marchand and his 1.35 GAA and record six playoff shutouts took the Huskies to the Memorial Cup final in 2016.

Four members of that team are still in the fold, including Harvey, who was the backup to Marchand. Forwards Rafaël Harvey-Pinard and Peter Abbandonato lead the offence, while strong defenders Taylor Ford and Jacob Neveu round out a solid defence corps.

Netminder Reilly Pickard, swapped one-for-one with Bathurst for Fitzpatrick, has been decent in a Phoenix uniform, and Thomas Grégoire and his 69 points from the back end led a surprisingly balanced attack. This Phoenix team has the most points in their six-year franchise history with 79. They have never won a playoff round. Huskies in 6.

The Remparts had one of the league’s hottest starts to the year at 8-1, but have since shown to be a middling outfit this season. Next year, they will be stronger, but this season, goaltending struggles, especially beyond netminder Dereck Baribeau, were a problem at mid-season.

The team acquired overager Antoine Samuel to resolve the netminding woes, and that worked. The Remparts are coming into the playoffs hot, with wins in eight of their last 10 games.

The Islanders, conversely, had a slow start to the season and got better as the schedule progressed. Head Coach and GM Jim Hulton promised the fans they would have a good team this year following a contending team last season that saw his team go to the final four.

This year, the Islanders acquired several key forwards at Christmas to jumpstart the offence, and it has turned their goal-scoring from awful to simply below-average.

The Islanders will go as far as goaltender Matt Welsh will take them. He has the ability to steal a series, and will do so here. Islanders in 6.

While no upsets, save 9-over-8, were predicted in the first round, the league goes wild in round number two.

Beware the Victoriaville Tigres, who will upset the Rimouski Oceanic in the second round. Drummondville, with their experience behind the bench, will overtake Halifax in the second round in a tough seven-game series that will be highlighted with Gravel-vs-Rodrigue in net.

By round three, the contenders are left: the Armada, Titan, Volts, and Tigres. Bathurst has the depth to defeat the younger Drummondville, while the Armada are a bit too deep for the Tigres and their dynamite top line.

Expect the unexpected for the President’s Cup. The Titan and their engaged defenders are the first team that can take and keep the puck from the Armada forwards, and they frustrate and overcome the Blainville-Boisbriand squad to win the second President’s Cup in their history.

The Titan are just too deep on the blueline and in goal for the Armada to handle. The CHL’s smallest market will make the trip to Regina for the Memorial Cup in May.